England came from 10-23 down with just 14 minutes on the clock to record a seventh straight win over France after a thrilling contest at Twickenham. 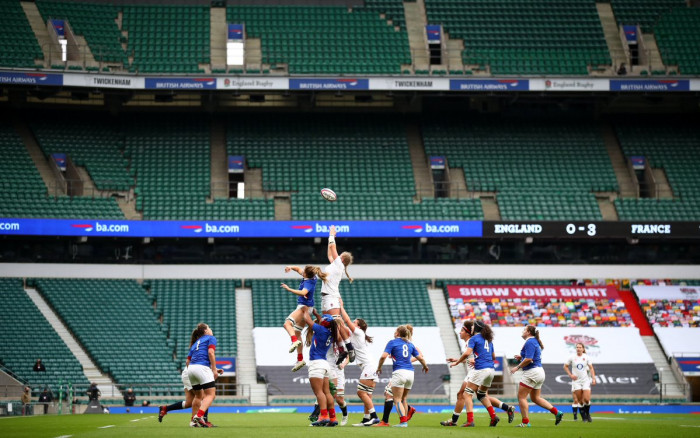 With the clock deep in the red, Emily Scarratt, stepped up to kick England to a 25-23 win to leave France devastated after such a turnaround performance from a week ago, where England were far superior.

For the neutral this was a brilliant game, for England fans far too error-strewn and for the French a gutting result after such a solid lead.

England in truth struggled until Simon Middleton took the extraordinary step of bringing on his entire bench in one go with 20 minutes left. Those replacements were the catalyst for a rejuvenated last quarter and their impact helped England keep an unbeaten 2020 record intact.

England began well when Claudia MacDonald chased hard in the French 22 and won her side an early scrum. But the France pack powered over the ball, won a penalty and then opened up with some sublime passing to get within an inch of the England try line just minutes later.

Caroline Drouin blew a kick at goal wide but France were back again with Safi N’Diaye and Marjorie Mayans linking up to get close to the England line again and this time Drouin did get them on the board.

England slowly built into the game and a first period of time when they managed to go through the phases consistently immediately brought a try out wide for Zoe Harrison, though it was perhaps a bit lucky with the ball bouncing favourably.

France hit back. An overthrow from Lark Davies back on England’s 5m line handed the ball to France and Laure Sansus switched play cleverly for Emeline Gros to go over out wide.

England’s mistakes continued to mount but they did get within metres of the French line shortly after. Shaunagh Brown shoved over the line but she was held up and another overthrow gave France back possession.

France wasted no time kicking the ball and continued with their wide attacking game. When Shannon Izar got hold of it on the half way mark, her neat switch with Cyrielle Banet saw the winger power 40 metres for a score that helped France go out to a 5-15 lead.

A foolish yellow card early for a kick early in the second half for Banet handed England a great opportunity to regain control and a couple of well run driving mauls yielded a try for Davies to get England within 5.

England had some of their best phases of play minutes later, retaining the ball very well, but the French defensive set was huge and there was no breaking through.

Simon Middleton then rolled the dice, bringing on his entire bench in one go and there was an immediate impact with Poppy Cleall driving over the line to get England back into it.

England looked a different team all of a sudden and when Ellie Kildunne shook off a few tackles to score, Emily Scarratt took over the tee and made it 22-23 with 6 minutes left.

With the clock in red, England won another penalty, which looked harsh on the replay,  and who else but Scarratt was on hand to step up and boot them to a win.

She barely smiled when the final whistle went, knowing England had surely just managed the greatest of escapes.