At the half way point of the English Women's Premiership, Richmond, Saracens, Bristol and Worcester occupy the top-four slots and are on course for the semi-finals of the competition which has introduced a play-off system this season. The weekend gone by saw Welford Road, the home of Leicester Tigers, host Lichfield and Wasps, in a growing trend of leading English stadiums hosting the top flight of the women's game. Saracens now play all of their home games at Allianz Park, Darlington Mowden Park Sharks have played at the Northern Echo Arena, Worcester at Sixways and Bristol at Ashton Gate 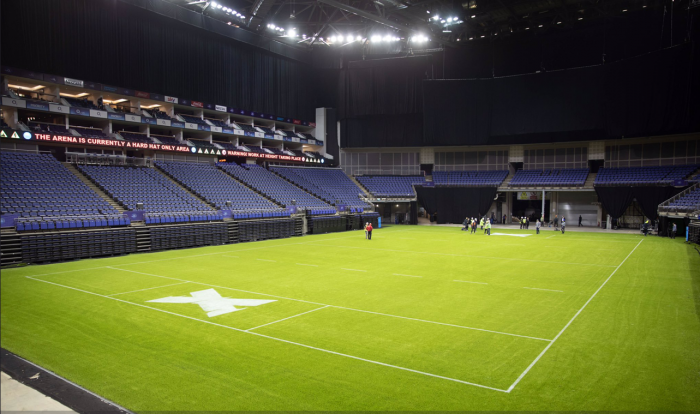 This game took place as a double header at Welford Road after the Leicester Tigers v Harlequins in the Aviva Premiership. The crowd that stayed behind were treated to a try fest with the host team Lichfield recording a resounding win.

Wasps actually took the lead in the first minute through Alice Sheffield, converted by Tess Gard’ner but Lichfield then took over possession and scored fine tries through Carys William, Amy Cokayne and Harriet Mills, who dotted town twice for a 30-7 lead after half an hour. Sarah Nicholas added two conversions. Wasps fought back to give themselves hope, with a converted try from Becky Ball and penalty from Gard’new bringing the half time score to 30-17

Lichfield began the second half with real purpose and intensity and ended up running in a further six second half tries, from Amy Cokayne(2), Carys Williams, Jasmine Coyne, Hannah Smith and Lucy Nye as their continual pressure and running rugby stretched the Wasps defence. Sarah Nicholas added three conversions to bring the score to 66-17 after 72 minutes. A late unconverted try from Wasps brought the final score to 66-22.

Commenting on the match, Lichfield’s Head Coach Rich Bennett said “This was our best performance of the season by far. We played excellent rugby for long periods throughout the game in exactly the style we want to play.

We worked extremely hard at the break down and in dominating that area of the game we earned lots of possession from which we created plenty of scoring opportunities.”

Our shape and our intensity was excellent in both defence and attack, which meant that we were able to keep the pressure on Wasps. We are continuing to progress really well and we are looking forward to our next few games”

In another high scoring game, Worcester continued their good form with some excellent attacking rugby against a spirited Darlington side who showed much improvement in the second half.

The home side opened the game in excellent form, achieving a try bonus point after just 17 minutes, an onslaught from which Sharks, despite their solid efforts, never really managed to recover from.

The game was only 45 seconds old when Zoe Bennion raced through for a try converted by Ceri Large. From the restart, Worcester’s forwards gathered the ball and fed it through the backs for Kelly Smith to score. Sharks had no answer to the power and skill of the home side and further tries flowed from Large, a second from Smith before the forwards decided to get into the act with a drive over try from Lark Davies.

Sharks rallied briefly at this point and took advantage of some complacent defence, opening their account with Jo Brown outpacing and evading tackles to score. Worcester’s forward dominance was then rewarded with a powerful drive over the line from Rochelle Clark.  Kelly Smith added her second try with a dynamic run just before half time, to see the visitors in the comfortable position at 41-5.

Sharks responded after the break with Ruth Laybourn using her pace to go round the outside of four defenders to score under the posts, without Worcester touching the ball. Sam Jaimeson took the extras. A good move between Smith and Large eventually saw the ball reaching Bixley, who scored her first Premiership try for Worcester.

Never-say-die Sharks rallied once again and had a very good 10 minutes of play, rewarded by a try from the hard working Abi Scott, again converted by Jaimeson, however, this was only a brief respite as Davies added her second try before the final whistle with Large’s  conversion sealing the game at 53-19.

Another huge win for Richmond, left Aylesford rooted to the bottom of the table while their hosts surged ahead at the top.

Aylesford started well enough but when Richmond got into their stride, the first try of the game came through Emma Croker. The next try came just two minutes later - Jackie Shiels sprinted up the pitch and offloaded to flanker Fiona Fletcher who raced over the line. Aylesford were again battling to defend their try line with winger Oli Davies the next to touch down. Rowena Burnfield’s brek then set up Shiels for a try and the home team led 24-0 at halftime.

In the second half Richmond looked to turn the screw and run hard at Aylesford through the forwards and Shiels was over again out wide, for two more tries almost immediately after the restarted.

Richmond were in full control at the set piece and England hooker Croker grabbed another try after a catch and drive.  A try from Burnfield followed by more from the outstanding Croker – who scored five on the day – made it a rout for Richmond and when  Davies scored again the score board went above the 60 point mark.

Richmond weren’t quite done though.  Caplice continually made good ground picking and going off the back of the scrum and was cutting some great offensive lines - she was rewarded for her efforts by getting a try of her own, converted by Shiels.

The game ended with Croker having the final say of the game scoring her fifth try, making Richmond’s triumphant score 74-0.

Both teams entered into this fixture knowing that whoever came out on top would finish the day 2nd in the table and in a great place running into the playoffs in January.

Both teams looked dangerous when they had the ball, making breaks, turnovers and also making key tackles and vital times. Ex Bristol player Deborah Fleming was fast and aggressive on and off the ball, causing problems for the Bristol defence. Her hat-trick in the first half was due to a combination that skill and pace and a charge down before just before half time took the score to 0 – 20 to the visitors who looked in total control at the turnaround.

Bristol started off well in the second half, with Izzy Noel Smith, Sarah Hunter and Olivia Jones all making breaks and creating chances for the home side.

However Saracens took the first score of the second half, with Poppy Cleall getting her second of the afternoon. Bristol came back fighting, as Amelia Buckland Hurry made a storming carry through the Saracens defence, only for the final pass to go into touch.

A strong Saracens scrum led to their seventh try of the afternoon, driving over the try line to take their score to 35.

Bristol powered on until the end, and Sue Neumann, who came on from the bench, ran a strong line through the Saracens line – offloading to Sarah Bern who dotted the ball down to give Bristol their first points of the afternoon.

Bristol Head Coach LJ Adams ‘We knew this was going to be a tough game. We had a great run into this match with wins from the last few games, but Saracens are reigning champions and we knew they would bring their top game today.”