Ahead of the start of the Women's Rugby World Cup Kate Llewellyn-Waters spoke to Wales flanker Jamie Kift who will co-captain her country in the competition which kicks off on August 20. 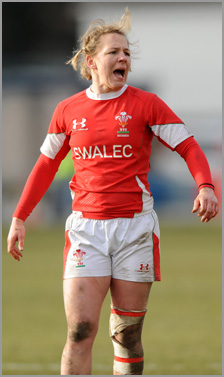 With 74 caps, Kift will be one of the most experienced players at the competition and she faces a tough challenge helping to lead a side who will face Wales, Australia and South Africa in their pool games.

Her no-nonsense work on the pitch has won high praise from head coach Jason Lewis who says:

Jamie consistently produces performances that are near super human. In both the mens and womens game she possesses the best stats for the Six Nations. She has a no-nonsense approach to the game, training and playing and is a role model for the younger players in the squad.

Kift has played international rugby since 1997 when her love affair with the oval ball began. She explains:

Kate Richards, a former Welsh fullback covered a school PE session for us and she invited me to play touch rugby and I have never looked back!

Wales are seeded sixth and after a disappointing 2010 Six Nations where they collected the wooden spoon, the Welsh side are going into the competition as underdogs especially as they are in the Group of Death alongside title holders, New Zealand, Australia and South Africa. This does not faze the big hitting flanker at all who says:

I cant wait to face these teams in the pool matches. We played Australia in 2002 and despite losing its a great opportunity to get one back. There has been a few positional changes one or two definitely for the better and training is going really well.

However, combining training and work is not easy as supply teacher Kift admits: It is really difficult. I am quite lucky because of my job as I can choose when I work so I can fit training around it. But some of the girls work all day then have to go out training after work at 9pm.

Sacrifices have clearly been made and the captain acknowledges, The biggest sacrifice is time. But it is a life choice we have made.

Despite being 2007s National Squad Player of the Year, 2009 Winner of the Dennis Donovan Award and 2009 Players Player of the Year Kifts proudest rugby moment isnt winning these individual accolades; instead her comments reflect the respect and bond she shares with her team-mates:

My proudest rugby moment is when we beat France in 2006. For me its all about the team. If I make the most tackles great but I do what I do for the team.

Known for her incredible work rate Kifts commitment to her team and her country is unquestioned. However, she remains unsure of her future direction once the World Cup ends, recognising the difficulties of combining a successful professional career with the demands of playing international rugby:

For now though the flanker remains firmly focused on the World Cup and her desire to get on to the pitch is undimmed: The highlight of a game is all of it for me. I love playing. Im just focussed on getting through the stages and doing what I can for the team.