A blistering start, where they raced into a 16-0 lead, helped Harlequins win their first Allianz Premier 15s title at Kingsholm in front of fans and glorious sunshine. 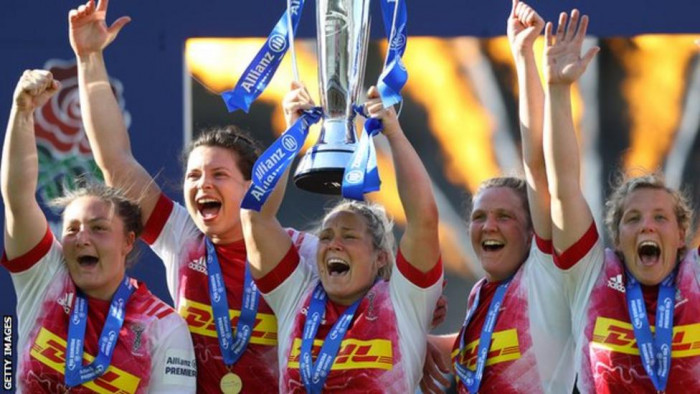 Having lost the last two finals to Saracens, Harlequins looked determined from the get-go dominating the early exchanges and were 16-0 within 20 minutes thanks to two tries from Amy Cokayne and the boot of Lagi Tuima.

The Quins pack had been dominant, with both tries coming from lineouts and well organised drives, while Saracens conceded a raft of penalties as their defence came under repeated pressure.

Quins had lost inspirational captain Rachael Burford to injury early on, but with Shaunah Brown and Leanne Riley playing with poise, their assault on the title looked assured.

Saracens though were too good to lie down totally with Marlie Packer provding grunt and power up front alongside Sophie De Goede who had an excellent game.

Packer grabbed a try back before Tuima kicked another penalty and then Saracens were reduced to 14 when Bryony Cleall was binned.

Sarecens though looked to be building some momentum and Packer drove over again.

Remarkably Quins were then reduced to 13 players when both Cokayne and Abbie Ward were sent to the sin-bin, and almost immediately De Goede powered over the tryline to threaten a proper comeback.

But Quins showed incredible game management when down two players, with a penalty from Tuima and patient play expertly winding down the clock.