One of the standout players of a mixed campaign for Wales has been the number 8 Sioned Harries, who we caught up with ahead of the clash with France tonight. 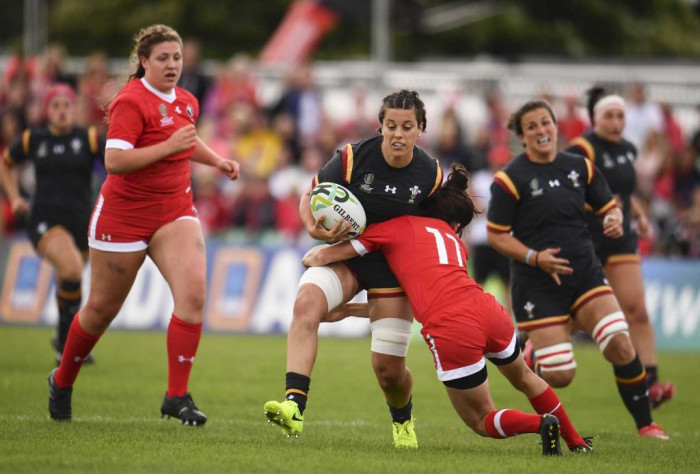 With just one win under their belts - a one point victory over Scotland on the opening day - Wales could be justified for going into the clash with the Grand Slam chasers with some trepidation, but Harries, who has been pivotal for Wales, is not thinking like that.

"It has been a mixed campaign for us certainly but there is no need for us to be discouraged. France are coming here looking for a Grand Slam but we haven't prepared any differently - we still have to focus on us, as much as that sounds like a cliche - and go through our processes so we can get things right.

"It is a big challenge playing France, but we beat them last time they came to Wales and we know sometimes they don't travel well, so our focus is on improving our performance and and trying to end the 6 Nations positively."

With head coach Rowland Phillips having set out his stall early in the year that this competition was about unearthing new talent to develop the playing pool in Wales ahead of the next World Cup, Harries says there were always going to be bumps along the road.

"We were obviously targeting certain wins and the Italy result was a real shock and disappointment, but we knew we were going into this 6 Nations with the next World Cup in mind and with the aim of developing the squad.

"Yes it is frustrating not getting those wins but if these are the hits we have to take to develop the squad then so be it. We will be stronger for it in a few years."

"I really am hugely impressed with them and there are more who aren't quite making the squads yet who are going to come through too. People like Alisha Butchers - you forget is only 20 years old and Jess Kavanagh-Williams has come through and had a great 6 Nations. There's some huge talent here that are going to get the exposure they need on the way to the next World Cup."

Having singled out the loss to Italy as a particular frustration, Harries says her side have plenty to work on.

"You can't really pinpoint one thing - we have a developing squad and that experience sometimes to win close games or to turn key moments in games into scores is only building up in lots of the players now. It takes time for that mental strength to come through to be able to play at test level for 80 minutes - it's not any one specific issue for us."

Having made her 6 Nations debut back in 2011, she is full of praise for how it has developed.

"It has hugely  improved - there is miles more exposure for one thing. The crowd in France last weekend for example was fantastic. And in Wales in that time too the profile is much greater.

"We now have a bigger focus on getting girls playing younger and I see the work that's going on in schools through my job as a PE teacher in schools. Getting to play at the Principality Stadium last weekend was amazing and for young girls now seeing us play there - well that gives them something to aspire to and that's what we want."

In the days before we speak, New Zealand confirmed their semi-pro status, something I ask Harries if she could see happening in Wales.

"Every union is in a different place. They are being rewarded for their high performances and I think here we need to push harder as players and as a squad to get those results so that down the line that is something we can push on and start talking about here. It's great to see the game pushing in that direction."

After winning her 50th cap in recent weeks, Harries was also thrilled to be named in the Welsh Commonwealth Games squad for the upcoming competition in Australia.

"It was unexpected. I have obviously played sevens for Wales before but I hadn't been involved much this season - Brisbane in January was my first involvement -  so it's hugely exciting. Once the game is done against France, then on Monday everything will switch to focus on sevens."