Heartbreak & Delight on the Road To Rio

We are reprinting the following article - a detailed piece on the reported rejection of South Africa's place in Rio by their Olympic Committee (SASCOC) - as it deserves a wider audience. It has been written by Kenyan coach Aschin Klein, appeared on Facebook yesterday, and makes a number of important points about the situation, some of which were echoed in the article from Colombia that we highlighted in yesterday's In Brief. However Aschin uses his own knowledge of events to go into more detail, and in addition covers the effect this decision will have on Kenya, who are down to replace South Africa at the Games. 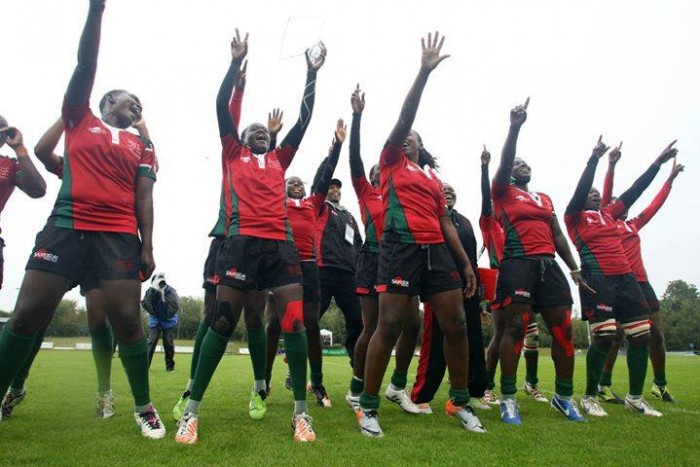 Kenya - on their way to Rio?

"Various media houses decided to run with the story that the Lady Blitzbokke were denied participation to take part in the 2016 Rio Olympics without any formal announcement from neither SASCOC or SARU. Since early this morning [Wednesday 18th November] I have received numerous e-mails and phone calls from local and International media regarding my position on this and whether or not I will be part of the Kenya Rugby Unions plans building towards Rio 2016.

"I declined to make any statements at the time. I informed everyone that when the time is right I would release something on my Facebook page and so I decided that tonight I will write something trying to cover all questions post to me from the various media representatives

"As we all know the Lady Blitzbokke did not finish in the top four at the World Series as requested from SASCOC and agreed upon by SARU to gain automatic qualification to Rio Olympics.

"For a moment I want to stand still at this fact.... Everyone who have been following the Lady Blitzbokke since the 2012 inaugural Women Sevens World Series in Dubai would know that the after the 2013 Sevens World Cup the National Women's Sevens team management were all replaced with only team Physio remaining. Newly appointed head Coach Renfred Dazel had to start from scratch with basically a new team. The coach himself was inexperienced in the women's game, with a new coaching staff, new group of players and a new brand of rugby were always going to be a tough one to pull of.

"During this first year the Lady Blitzbokke only took part in invitational tournaments after losing core status with a poor finish in the World Cup. The only real high level competition came in the form of the 2014 World Series Qualifier in Hong Kong where the Springbok Women only needed to finish in the top four which they did on good style beating France and Netherlands.

"Now this is where I find the biggest problem off all. Whoever from SARU decided to sign the agreement with SASCOC on a top for competition either did not think this decision through, or set the Lady Blitzbokke up to fail to qualify for Rio. Everyone knew that it would be near impossible for the Lady Blitzbokke to finish in the top four in their first season as core team under new coaching staff and against a group of basically a top six who have been part of the World Series since December 2012 and who played against top competition on a constant basis. This was just unrealistic and wishful thinking by SARU Management.

"Anyone who knew rugby, especially women's rugby, would have told you that the Springbok Women would need at least a season or more to settle before becoming really competitive. This was evident in the way the Lady Blitzbokke performed in the last three tournaments of the series as well as their performance in Dublin. They might not have qualified at the World Series Qualifier but were definitely the best team at the tournament.

"The decision to sign an agreement with SASCOC will remain something I will always wonder about. On what grounds did SARU base their decision to sign such a agreement while Soccer SA and Cycling refused to sign the same agreement that saw their teams able to qualify through alternative qualifying competitions? This together with SARU's decision to possibly offer Heyneke Meyer another four year contract extension is starting to put the spotlight firmly on SARU's ability to make decisions for the betterment of the game in South Africa.

"Now shifting to SASCOC... Just last Sunday the President of SASCOC Mr. Gideon Sam spoke on the Women Sports Talk show about transformation of sport and where women fit in, as well as their (SASCOC's) commitment to develop and grow women sport that had been neglected over the years. I recall his comment about creating and giving women the platform to showcase their talent so that women sport can grow. Now my question is - do you getting a bigger platform then the Olympics to showcase and grow your brand? Who are these guys really fooling with their commitment to transform sport and create equal opportunities when they keep on cutting of women sport at the knees?

"These ladies had made a lot of personal sacrifices, their family and loved ones had to take back-seats so that they could focus on their dreams. They have worked tirelessly for the past two years to become a tight knit unit. SASCOC has failed women sport big time. I believe as leaders of sport they needed to have looked beyond agreements and looked at the facts of sport's development and the growth of this team. When a decision of sporting leader will have a huge negative effect down to grassroots level they have failed in their mission and must feel ashamed in themselves.

"How does this effect everything else...? Should SASCOC decide to keep with their original decision the Kenya Lionesses will get the opportunity to represent Africa at the 2016 Olympics. Now various questions were posted to me about the readiness of the Lionesses, their chances, my involvement and the way forward for the lionesses.

"I have been involved with the Lionesses and Kenya Rugby Union since July 2015 working towards World Series and Olympic Qualification where upon my contract expired. Regarding my direct involvement with the Lionesses on the road to Rio I can confirm that there have not been any discussions about my involvement with the ladies as nothing has been made official from either World Rugby, Rugby Afrique or SA Rugby regarding the Springbok Women's participation. I however can confirm that I have been invited for an interview for the Director of Rugby vacancy at Kenya Rugby Union and should the possibility present itself I will definitely consider becoming actively involved in putting structures in place to help the Union to contest for two gold medals at the 2016 Olympics as well as 2018 World Cup Qualification.

"I know even with all the excitement with the possibility of the Olympic dream coming true for these players I know that not one of them wanted it to come at the expense of any other team. Most of these players have close friendships with the South African players and this news also hurt them just as much and they do share their pain. What I can say is that these players have work just as hard to get the team in a position to earn the right to represent Africa at Rio. Yes, they did not win the Qualifiers but they have placed themselves at the right place should something happen like what is happening now.