New Zealand have chosen Auckland lock Victoria Heighway (pictured) to skipper their side in the three-match tour of England which starts this Saturday. Heighway replaces the injured captain Melissa Ruscoe but having played England in the last two World Cup finals, she is relishing the challenge of leading the Black Ferns. 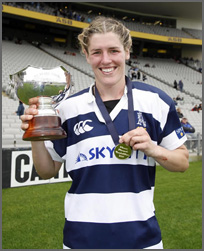 Having arrived in London earlier this week, Black Ferns skipper Victoria Heighway is itching for action against England this weekend.

She says much of this week has been about settling combinations and gelling as a squad, as unlike England, the Black Ferns rarely meet as a group and have played just four games since the 2006 World Cup.

It is frustrating definitely not to be together more, but thats what we get for being at the end of the world, she jokes.

It is difficult for us to settle on combinations when we have so few games together and rare matches at international level. However this year the NPC competition here has been much more competitive than in recent years and that has helped to drive a competitive edge. I play with Auckland and in the past we have sort of been expected to go out there and win all of our games, get to the final and win that as well. This year Wellington beat us and it was a much more closely run final. That has helped the players to get used to having more pressure at a higher level and get used to a tougher style of rugby when it is needed.

Heighway has plenty of experience in facing England, having played in the Womens Rugby World Cups of 2002 and 2006 and having also been part of the New Zealand squads who hosted England in 2001 and 2005.

Lots of our girls have never played England but for those of us who have we know what to expect. England have always had an immense pack, they are very physical and strong and there is an emphasis on that element to the game here which I guess is slightly different to what we're used to back home. We've got a strong running team and we like to play it quickly so throughout these games we will want to get stuck in but not get too tied into a contact game up front because we've got some great players out wide and we'd like to use that.

The current Black Ferns squad of 28 includes six new faces as well as a number of other players returning to the squad after a period of absence.

With two full test games and a match against England A, it will be an action packed seven days for New Zealand which starts this Saturday night in Esher.

Heighway says that her side need to develop as a squad as well as leaving their mark on England who will be hoping to wrest their World Cup crown away from them next season.

No team will come on a tour to prepared to lose and we're no different, we want to win and beat England on their home ground but it wont be easy. In saying that, we also need to strike the right balance between trying to win the series and building for the World Cup and getting to see the players in action. Its a huge challenge for us and as captain the thought of running out at Twickenham in the third game is also really massive.

For Heighwood, already capped 26 times, this tour will begin a journey towards the World Cup, now less then 10 months away. Along with vice-captain Amiria Rule she'll be hoping to lead her side to three victories and if they manage to do so it will certainly ensure that the Black Ferns come back to London next summer as hot favourites to take another World Cup title.