There was a dramatic end to Europe's final World Cup qualifiers, where all four teams were in the hunt going into the last round of games, but Italy secured their tickets on the plane to New Zealand while Scotland pulled off a last gasp win to beat Ireland and fight on for another shot - and at the same time, eliminating a team who were World Cup semi-finalists just six years ago. 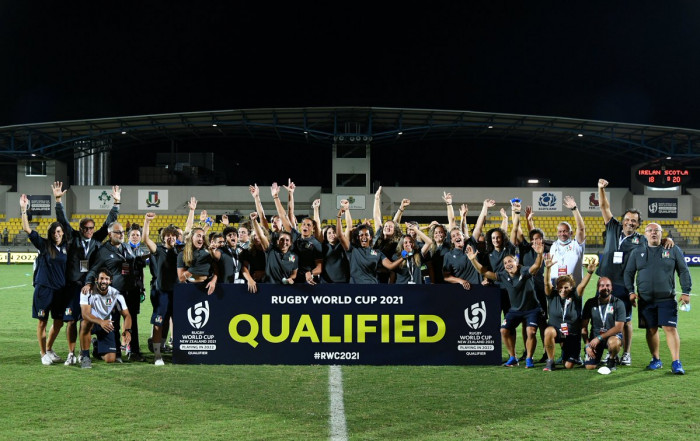 Italy beat Spain 34-10 with a crucial bonus point in the first game of the day to move onto 10 points, meaning Ireland had to beat Scotland with a bonus point to claim the Europe 1 spot on the head-to-head rule, having overcome Italy 15-7 in round two.

Ireland looked on course for a narrow win that would have taken them into the Final Qualification Tournament that will determine the 12th and final qualifier for the World Cup until Sarah Law kicked a conversion with the final act of the game to snatch a 20-18 victory that keeps alive Scotland’s hopes of reaching a first Rugby World Cup since 2010.

Italy eventually ground down Spain to win the day’s first game to the delight of the home crowd.

Perhaps unsurprisingly given what was on the line, the game started rather cagily, but it was Italy who nearly took the lead in the ninth minute when captain Manuela Furlan went close, but play was brought back for an earlier knock-on.

They did take the lead in the 14th minute, though, when a well-worked lineout move saw tight-head prop Lucia Gai power over for a try. Centre Michela Sillari converted for a 7-0 lead.

Two minutes later things got even better for the host nation when a lovely kick over the top of the Spanish defence by scrum-half Sara Barattin was perfectly placed for Sillari, who scored the try before missing the conversion to leave the score at 12-0.

Number eight Lourdes Alamada and scrum-half Patricia Garcia tried to spark a Spain fight-back as the first quarter of the match came and went, but they were repelled time and time again by the Italian defence.

With 11 minutes to go until half-time Italy extended their lead to 15-0 when Sillari kicked a penalty.

Spain had to get themselves on the scoreboard before the interval to get a foothold in the game and they did so in the 34th minute when Patricia Garcia kicked a penalty, 15-3 the way it stayed until half-time.

Those points seemed to give Spain confidence and they started the second half well. In the 45th minute a great run by centre Amaia Erbina got them close to the try-line and a couple of phases later they were held up as they tried to go over for a try.

Five minutes before the hour mark their territorial possession eventually paid dividends when an excellent pass from fly-half Anne Fernandez de Corres found centre Amalia Argudo on an arcing run and she went over under the posts for a try. Patricia Garcia converted to make it 15-10 to Italy with all still to play for.

That hurt Italy and sparked them back into action, second-row Giordana Duca scoring their third try with 19 minutes remaining, Sillari converting to make it 22-10.

That left Italy hunting their fourth try and a crucial bonus point and it came with five minutes to go when fly-half Veronica Madia popped up on the wing to go over and spark celebrations. Sillari missed the conversion.

Right at the death, Italy were awarded a penalty try when Barattin was tackled off the ball when she looked set to score. Spain replacement Paula Medin was yellow carded and Italy had won 34-10.

After the match, Furlan said:  “I am so proud to lead this group of players, we are all friends and we never give up and we had to really fight hard to beat Spain and get the bonus point after they came back into the game.”

Spain head coach José Antonio Barrio said:  “We gave it everything and when we got back to 15-10 down we thought we could go on and win the game, but after that Italy got stronger and were more clinical than us.”

Scotland fought back from 18-13 down to win the second game with the last kick.

The opening exchanges were tight, but as 15 minutes came and went it was still 0-0.

It was going to take something special to break the deadline and it came from Ireland tight-head prop Linda Djougang, who used her power to bust through five Scottish defenders to score an excellent try. Fly-half Stacey Flood missed the conversion.

In the 24th minute, Scotland were awarded a kickable penalty with Ireland flanker Edel McMahon yellow carded for a dangerous tackle on her opposite number Rachel McLachlan. Helen Nelson made no mistake, kicking the penalty to make it.

Scotland had a lot of possession while Ireland were short-handed, but the Irish defence stood firm and she returned with her side still leading by two points.

Two minutes before half-time, playing with a penalty advantage, Nelson’s lovely kick into the dead ball area was touched down by winger Rhona Lloyd for a try. Nelson missed the conversion from out wide, but they were 8-5 up at the interval in this nervy encounter.

Scotland’s scrum had come to life late in the first half and after 46 minutes they won a scrum penalty.

Replacement fly-half Sarah Law, just on for the injured Nelson, kicked to touch and, from the resultant lineout, Scotland eventually scored their second try through hooker Lana Skeldon. It was again unconverted, but Scotland now led 13-5.

In the 53rd minute, a Flood penalty for Ireland reduced the arrears to five points.

And on the hour mark, the Irish had their second try, veteran replacement loose-head prop Lindsay Peat crashing over after they kept the ball alive for a number of phases.

Flood converted and it was 15-13 to Ireland before she added a penalty to give her side a five-point cushion.

With five minutes to go Ireland were chasing the two tries that they needed for a bonus-point win, but Scotland still had a win in their sights and full-back Chloe Rollie burst into the Irish 22 with a brilliant run.

A couple of phases later a dangerous tackle by Irish centre Eve Higgins on Scotland centre Lisa Thomson saw her given a yellow card, meaning they would finish the game with 14 players.

Scotland kept the ball alive in the final two minutes and Rollie finally burst through to score a try to tie the scores, running round nearer the posts to give Law an easier conversion attempt.

Law held her nerve to kick the winning conversion with the clock in the red to spark Scottish celebrations and leave Irish players in tears as their Rugby World Cup 2021 dreams are over.

After the match, Scotland head coach Bryan Easson said:  “We will think about the repechage event soon, but for now I just want to praise the grit and determination these players showed in those last few minutes.

“There was a turning point in the game when we turned over the ball in our own half when Ireland were 18-13 up and you could see our energy levels going up at that point.

“We knew we’d get another opportunity and we took it when it came.

“The belief in this group has been building up and up over the last two years and I am very proud.”

His Ireland counterpart Adam Griggs said:  “We are all devastated, we had the win within our grasp and it slipped away.

“We seemed to lose momentum in the last 10 minutes, credit to Scotland they were fighting for their lives, but we would have hoped to see that game out and at least have made the repechage.

“The girls have worked so hard and they are hurting a lot right now.”