Hong Kong women won a match in Europe this week for the first time,  after beating the Netherlands 14-12 on 26 November in Amsterdam. The teams play again this weekend. 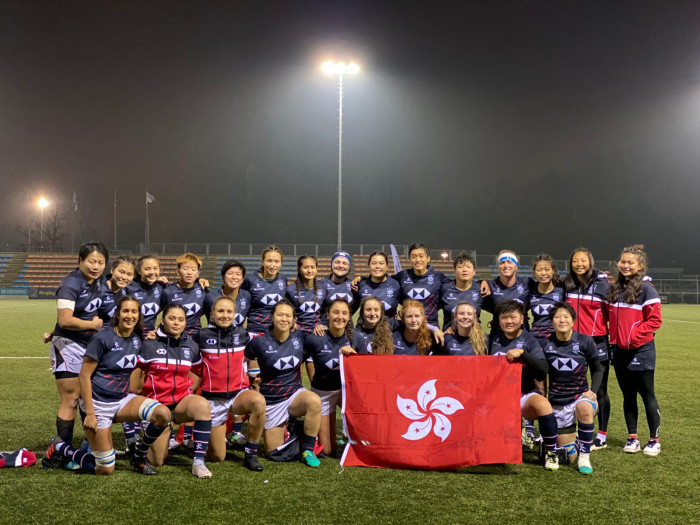 Hong Kong took a 7-0 lead into half time after a try from bustling prop Tammy Lau Nga-wun, with fly half Aileen Ryan adding the conversion, before stretching the lead to 14-nil early in the second half with tight head prop Lee Ka-shun scoring and debutant Lara Schats converting.

The Netherlands stormed back with two tries, including a final score in the corner with ten minutes remaining. That try wasn’t converted, leaving Hong Kong with a two-point lead down the frenetic final stretch. Hong Kong soaked up the pressure and were positioned to add to their lead but a final penalty attempt went wide as time expired on what is a historic first victory over an European opponent.

Hong Kong Rugby Union Head of Women’s Rugby Performance and Hong Kong coach, Jo Hull, hailed it as a pivotal win, but is keeping the expectations of a young team with ten new caps firmly grounded.

“It was a meaningful win for us, but we are keeping our feet on the ground. They had some new players, and I expect them to revert to their experience now. We are expecting to play a different Netherlands team on Saturday.

“It was a great win; a real nail biter, but slightly frustrating at the same time. We lacked execution in the first half. We had possession but could not convert opportunities and made too many individual errors.

“At half time we talked a lot about executing, and playing our game. Our set piece and lineout were working well, so we could play more of a kicking game and we controlled the game well in the second half,” said Hull, who wants her team to demand even more of themselves on Saturday.

“Our only focus now is on finishing the job. How we improve from Tuesday to Saturday is the biggest test of the tour,” Hull added.

For Hull the difference in the first test came from Hong Kong’s ability to play their desired tempo game and timely contributions from the reserves.

“We had good impact off the bench; Maelle Picut who came on at No.8 and Jasmine Fung came on at centre and added significant impact and energy. We played with the momentum and tempo we wanted to, and did well at slowing them down.”

Hong Kong is now preparing for the inevitable backlash from the hosts.

“Our focus is on our recovery and our execution. Being sure we are physically and mentally ready to play and getting our best combinations out on the pitch.

“One of the most pleasing things we saw in the first game was the things we have been working on in training being executed on the pitch. That is a huge confidence boost for the girls,” Hull added.

Hull expects what was already a significant physical challenge to intensify. “They are much bigger than us, so I was pleased with how we played at the breakdown and in contact, particularly after we were disappointed with our performance in those areas in our training camp with Scotland.

“We held our own on Tuesday, but I anticipate a more physical game ahead. We used our speed and tempo game well against them and will need to do it again.”

Hull also noted the positive performance of some of the newer players like Roshini Turner, who made her Hong Kong debut in the second row with veteran Tsang Ching-man, and another emerging star in Amy Pyle who did not shy from the contact game.

“Roshini played really well in the lineouts, both of the rows did, they paired well and it was a good debut for her. Amy also had a very strong game, and was really physical in defence.”

A couple of young heads also showed excellent composure for Hull in fly half Ryan and centre Lara Schats.

“They performed well. Despite being young, they are reliable kicking options for us and helped control the game. It was a real challenge for them to step up into what is a big job and in big positions. We were pleased with all of the new players.

“They now understand what is required at international level. It was an eye opener for them and the focus will be on how well we adjust from tonight to Saturday.”

Hull will be keen to close out the sweep but objectives have largely been met as the team grows in confidence.

“Our goal is to play more outside of Asia. We are now seeing the results. This win was a huge marker for us, to beat a team from outside our comfort zone, particularly a team as challenging as the Netherlands with their physical size and athleticism.

“It is an experience that will impact our Rugby World Cup journey and the players are absorbing every bit of it to help them down the line,” said Hull.