With Hong Kong running out 11 new caps against Spain, ranked tenth in the world, the results Sunday’s test match in Villajoyosa, Alicante was largely as expected, with the hosts posting a heavy win, 60-5. 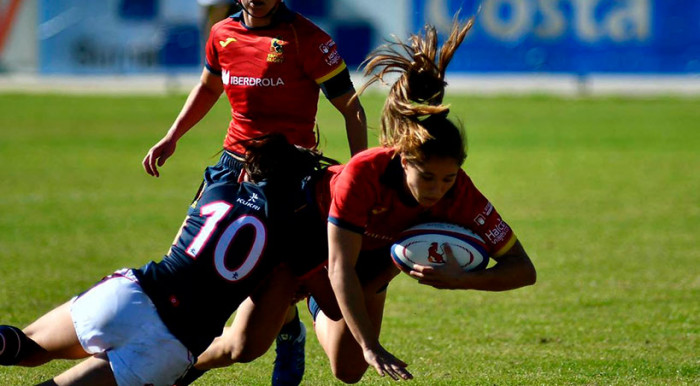 With 14 new caps overall, Jo Hull, Hong Kong coach and Women’s Rugby Performance Manager at the HKRU, was keen to get her squad some exposure to elite international rugby.  That mission was achieved in spades, as Spain put on an exhibition, running tries in from far and wide as they extended a 33-0 half-time lead to a 60-5 score at full-time.

A veteran Spanish outfit had Hong Kong on the back foot from the opening scrum, and spent nearly the entire first half attacking the visitor’s try-line.  Hong Kong’s defensive effort was admirable but the pressure was too much as Spain ran rampant early on, taking a 20 point lead with flanker Paula Medin scoring a natural hat-trick in the opening quarter after captain Isabel Rico’s game opening try.

Hong Kong enjoyed more ball in the second half as the game loosened. The addition of Grace Hood, Charlotte Myrans and Vincci Leung after the break added some physical presence to the Hong Kong attack, which started to cross the gain-line for the first time.

The trio were amongst 11 new players earning first caps, with all of them deemed to have potential to form the core of Hong Kong’s qualification efforts for the 2021 Rugby World Cup.

The group will have a newfound respect for the pace of the international game after today’s outing, particularly the new front row forwards, with hooker Myrans and Leung, joined by prop Yip Cho Kwan in earning Hong Kong honours.

The glimmers of front row depth are showing with the three playing well and proving capable ball-carriers and tacklers in the loose, but Hong Kong’s woes in the set piece remain signs of a steep learning curve.

Spain’s dominance in the scrum will be a particular concern for the coaching staff ahead of next week’s clash with ninth-ranked Wales, a side that Hull expects to present a more forwards-heavy game plan than the mobile Spanish.

Cheng Lok-tung made her senior debut today at fly-half, coolly handling the intense pressure for the most part, on a day when the backs were frequently handed a defender along with the ball.

Recent U20s graduates Sarah Lucas and Grace Hood earned their first caps, with Lucas starting before ceding way for Hood in the second.  Given the game script, Lucas was not able to show much in the way of attack, although she was an important and largely reliable part of a never-say-die defensive effort.

Hood was effective after coming on at half-time with her crash ball attacks helping Hong Kong breach the Spanish line.

Hood and Cheng combined well to set-up Hong Kong’s only try.  Cheng pounced on a gap created by another strong ball carry from Hood, with the Spanish defence in rare disarray, Cheng’s half-break brought the attack to the host’s try-line midway through the second half.

Hong Kong showed admirable patience as they recycled possession across a few phases before flanker Winnie Siu caught the defence sleeping and quickly collected the ball from the base of the ruck to dart across the line for the try.

Encouragingly, none of the bevy of newcomers looked out of place on debut, however, the intensity and pace of the game will have come as a rude awakening.

As Hull indicated prior to the tour, the most important result won’t be found on the pitch, but in how much - and how quickly - the players can assimilate the lessons learned from today’s debuts.