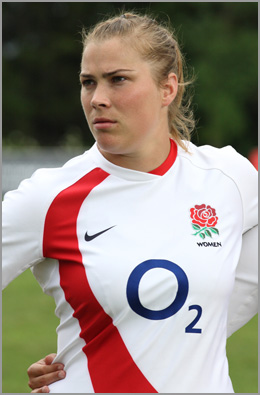 England coach Gary Street has named the 26-player squad he hopes can lift the Women's Rugby World Cup this year in London.

The final England line-up is vastly experienced with over 700 caps among the named players but inevitably Street has had to make some tough calls with such a tight squad allowance.

As expected Bristol No. 8 Catherine Spencer, (pictured) who led England to a fifth successive RBS 6 Nations title and victory over world champions New Zealand this season, will captain England in her second World Cup campaign.

Street has also been able to recall a number of players who were absent for the majority of this international season through injury. Those to return include Charlotte Barras and Danielle Waterman out wide, both who are vastly experienced England players but who missed the entire 6 Nations campaign this year due to various injuries.

In the pack Street has also brought in Sarah Beale, Sarah Hunter and Rosemary Crowley, the young verstaile prop from Lichfield. The forward trio also sat out the 6 Nations this year with injuries though Hunter did make a return in the final England A game against France A.

The inclusion of players who have been absent this year so far, inevitably means disappointment for players who helped England to a Grand Slam in March. Those unlucky to miss out include Fran Matthews, Michaela Staniford, Jane Leonard, Samantha Reeve, and Kim Oliver, and their absense from the World Cup squad shows just how much depth England have in their playing resources with not many other squads able to leave out such talented players.

Elsewhere in the squad, Saracens hooker Amy Garnett is the most experienced player with 86 caps as she heads into her fourth World Cup.

Lichfield's Emily Scarratt is England's youngest at just 20-years-old, but having scored 16 tries in 18 games, including clinching two 6 Nations medals, Scarratt will be well able for the pressure.

Gary Street said: "This squad is the culmination of three years of planning. I believe we have selected an experienced, skilful and adaptable squad who can do the job at the very highest level. There are also some quality players who have not made the final cut, and who would almost certainly be in other international world cup squads, so to come up with this squad has been a challenging and difficult task but one that we are confident with."

The World Cup kicks-off on August 20th, when England open their campaign against home nation rivals Ireland at Surrey Sports Park, before pool games against Kazakhstan and the USA. The semis and final take place on September 1st and 5th at the Twickenham Stoop.

Street added: "The squad has now been announced, and now we really start upping our momentum. The players are coming to the end of their rest periods, so will soon be working hard on their strength and conditioning, before our world cup camps starts. This is a really exciting period."