We preview round two of the IRB Women's Sevens World Series and look at Australia, Brazil, Japan and Russia 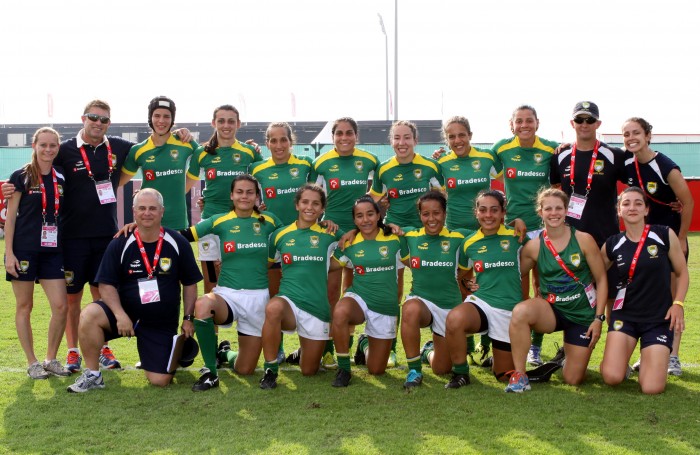 It is a surprising fact that the current World Champions, and one of the most feared teams in women’s sevens, have reached the semi-finals in all four of the IRB tournaments played to date - but have only gone on to make it to one final, suffering final-four defeats to England, Netherlands and New Zealand.

Their only success was at Hong Kong back in March - though they lost the final (probably the best we have seen to date) 15-10 to England.

Since then Australia have only managed to record two fourth places (losing play-offs to Canada and Spain) – results that must have disappointed Chris Lane and his talented squad, lead by Rebecca Tavo. Unfortunately the challenge of improving on that performance this time has not been helped by the absence of Tavo, and the withdrawl of  Emilee Cherry (ScrumQueen’s sevens player-of-the-year for 2012). However, their absence has given oppotunities for other squad players, most notably 19 year-old Ellia Green, an ex-junior national sprinter with a personal best of 11.6 for 100m (good enough to win an Olympic medal as recently as 1964).

Away from IRB tournaments even their one tournament success to date – the Asia-Pacific Championship – was not without its drama, including as it did a shock defeat to Japan.

And it is against that same Japanese team that Australia open their campaign at Houston, before they go on to meet Brazil and Russia. However, Australia invariably start their tournaments strongly and it is unlikely that Lane will be caught out by the Japanese again. They should qualify from the pool with ease, though their final pool game – against Russia – promises to be a fascinating clash as the two teams have never met before.

The South American champions have had a tough time in their four IRB tournaments – finishing last in three – but will enter this tournament with some confidence. As with Australia, their best performance came at Hong Kong last year when the finished 9th out of 12.

It will also be interesting to see what effect former all-black Dallas Seymour will have had on the team. Appointed to coach both the men’s and women’s teams, Seymour arrived only a few weeks before the first round in Dubai. Given two months since then to prepare his team for Houston the former coach of the Chinese women’s team will have been able to stamp his mark and will be looking for improvements.

There is a real chance he could see some. Brazil have been drawn in the same pool as with one of the two teams they beat in last March – Japan – so, if they repeat that success, it is possible that they could make the quarter-finals for the first time. Even if they fail to make the last eight (and, given Japan’s progress, it’s a match-up that is impossible to predict), Brazil will be confident about winning the Bowl against opposition such as Argentina and Trinidad.

The Japan game will be that final third tie on Day One. Before that they will need to keep the scores down against Russia and Australia, which could be challenging. Though Brazil held Russia to a 12-12 draw at the World Cup in 2009, a significant gap has opened between them since and a similar result in Houston would be a huge shock.

Japan’s only previous appearance in an IRB event since the last World Cup was in Hong Kong in March where they finished 11th with only a single win over Tunisia.

However, there have been signs of steady improvement in recent months. Their win over Kazakhstan to qualify for the World Cup in October was seen as a surprise by many, but was in fact only a repeat of a similar result in the Asia-Pacific tournament a month before.

That event in Borneo also saw the Japanese famously beat Australia in the pool stage and – although the world champions gained revenge in the final – the Japanese still managed to score three tries against their higher ranked opponents.

The turning point for Japan’s women seems to have been the take-over of the team by the men’s Union a couple of years ago. Since then improvements in the management of the national team means that they are now Asia’s number two sevens team (behind China) – and aiming at number one.

However, this tournament is still a big step-up, and the real marker of progress will be the clash with Brazil – a chance for Japan to gain revenge for the 14-12 defeat they suffered 10 months ago.

Pavel Baranovsky’s team was one of the sensations of Dubai, though for anyone who had seen their progress in IRB and FIRA tournaments in recent years, it was no real surprise.  The progress of the team in recent years has been as consistent as it has been impressive. Seventh in Europe in 2009, sixth in 2010, fourth in 2011, third in 2012 – success outside the continent was only a matter of time.

Even so, to top a group containing not only Canada but also New Zealand was truly remarkable and, but for a nail-biting quarter-final defeat to Spain, who is to know how far they might have gone. As it was, that Spanish defeat was the only game Russia lost in Dubai. Overall, only New Zealand finished with a better record.

On the field it was Navrat Khamidova who grabbed the headlines, though again anyone who had seen the way she had handed-off Heather Fisher in the European Championship would have known what to expect!

However – for the first time – Russia are playing outside of their home season. The challenges of the Russian climate mean that the team will have had little – if any – chance to train or play outdoor since Dubai which cannot be a positive. Even so, a quarter-final spot would seem to be the minimum for a team that fears no-one. And once they are in the last eight, who (after Dubai) would bet against them making the final four… or even better.