How women changed the face of 7s

We look at the contribution women have made to the growth of sevens, on the eve of Commonwealth Games in England. 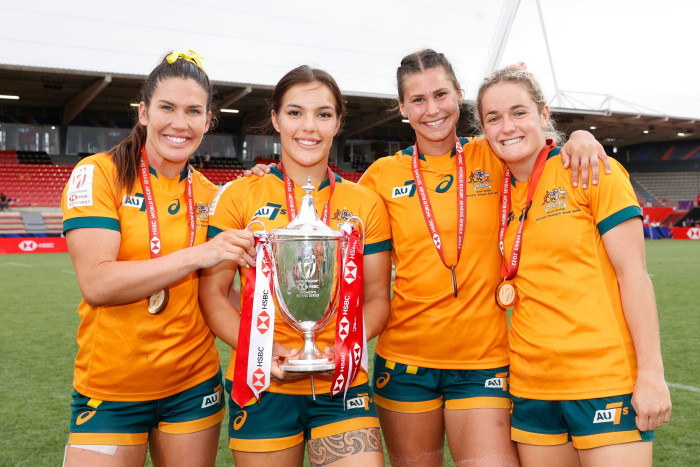 When the stars of women’s sevens take to the field in Birmingham later this week they’ll be taking part in one of the most high-profile Commonwealth Games ever, and one of its most anticipated.

This year’s Games also has a positive story to tell on gender, as the first major multi-sport event to award more medals to women than men – with 136 medal events for women, compared to 134 for men.

For leading players like New Zealand’s Portia Woodman, Australia’s Charlotte Caslick and England’s Meg Jones, the spotlight of Birmingham will be nothing new.

Women’s sevens now operates as part of a global circuit, with an Olympics, World Sevens Series and a World Cup all part of its schedule.

But while there is much to admire about the march of the women’s sevens game and its burgeoning profile, in reality, it is only in recent years that it started to be properly included within the game.

Though sevens has been part of the Commonwealth Games since 1998 for example, women’s rugby will be making just its second appearance this week.

Rugby was first included in the Games as a male-only offer, in part because it was seen as a balance to the inclusion of women’s netball in the same year.  The success of that initial outing encouraged its retention in Manchester in 2002 - and ever since.

Rugby then became a ‘core sport’ for the Games – but only rugby for men.

It took the success of Australia’s women’s sevens team to change things.

When the Gold Coast was awarded the 2018 Games there was a clamour from the public to see their local heroes in action – the Australians having won Olympic Gold the year before. Thanks to the fortuitus hosting that year, and then the brilliance of the debut final itself, which New Zealand won, the women’s game is now a permanent fixture in this event.

This pattern of authorities granting access for women to be part of major events well after men, has been a hallmark of the sport since it started to grow as a format in the 1990s.

When World Rugby - then the IRFB – launched a Sevens World Cup in 1993, it left women out completely till 2009.

And when the game first bid for Olympic inclusion, it was as a male-only offering.

It took two IOC rejections to the bid for rugby to join the Olympic Games in 2008 and 2012, before the game went back to the drawing board and accepted that only a gender-inclusive offering would do.

The work to change the IOC's mind began with granting women the opportunity to play in the Sevens World Cup for the first time in 2009.

Sweden’s highly influential IOC member Gunilla Lindberg led a commission to watch on in Dubai - and it could hardly have gone better.

The results in the men’s competition were wild. All the big guns were knocked out, before Wales won a thrilling and shock title.

But it was the women’s competition which helped seal it – thanks in part to an amazing final between Australia and New Zealand which went into extra time, where a golden score would award the title to Australia, who are among the favourites again in Birmingham.

In my book, ‘Scrum Queens – the story of women’s rugby’ Australia legend Selena Worsley picked up the story at the end of the game.

“Everyone on the field was so focused. You don’t fall apart, you don’t panic. The full-time whistle came, and we just collapsed on the ground. It is indescribable how that felt at the end.  It was euphoric. It was bizarre. The night we got back we went and hired a place down at Bondi beach and the whole team was there and it was brilliant. Unforgettable. Knowing how important it was to help us get a spot at the Olympics later on, was even sweeter.”

With such a successful outing in Dubai, the ante was stepped up to persuade the IOC to choose rugby for the 2016 Games.

Their interventions plus the success of the outing in Dubai, helped to secure a comprehensive 81-8 vote in favour of rugby’s inclusion in the Olympics for the first time since 1924, when it had appeared as a men’s 15s event.

The decision changed the face of women’s rugby forever. New revenue streams began to fund professional women’s international sevens teams and with a new World Sevens Series on the horizon, women’s rugby standards would skyrocket by the time it took to the Olympic fields in 2016.

It is no exaggeration to say that the efforts of Soon and all those involved in 2009 are why there is now expectation rather than hope that women are represented everywhere sevens has a major platform.

Most of the players in Birmingham this week will understandably have little memory or insight to the role that those women had in helping them to take their place on the game’s biggest stages.

But if you agree that you’ve got to know your past to understand and appreciate your present, then this is a history lesson which won’t be wasted.