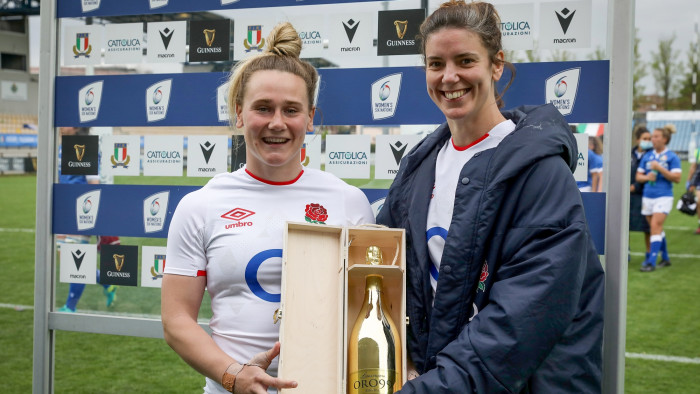 The 35-year-old made her 124th senior international appearance from the start after being sidelined with injury for 13 months and lasted 53 minutes of a contest that saw the Red Roses frustrated for large parts of the first half.

Italy - contesting their first match of the 2021 Championship - proved a tough nut to crack from the first whistle but afforded England a 17-3 half-time lead thanks to two mistakes that led to Emily Scarratt and Vicky Fleetwood tries.

The floodgates opened after the break - with further tries from Abby Dow (2), Harriet Millar-Mills, Helena Rowland, Bryony Cleall, Claudia MacDonald and Lark Davies adding gloss to the scoreline - and Hunter was pleased with how her side gradually ground down their opposition.

“We always know coming to Italy is difficult,” she said. “They played some fantastic rugby in the first half and we just had to bide our time.

“We probably didn’t come out with the intensity or tempo that we probably should have done, but that’s credit to them. They put us under pressure, and they played well.

“We had to regroup at half-time and I think the second-half performance reflects more of what we’ve been doing over the last few months in training.

“We had to wind Italy down a bit and some of our tries towards the end were outstanding, which showed how much strength in depth we’ve got.”

While England’s second win from two confirmed their place in Super Saturday’s showpiece as the Pool A winners, Italy will look to bounce back at the first time of asking away to Scotland next weekend.

And despite the heavy defeat on home soil captain Manuela Furlan insisted there were plenty of positives to take into their next clash in Glasgow, in which a place in the 3rd/4th place play-off will be up for grabs.

She added: “We played well in the first half and their tries came from our own mistakes. Our rhythm was good at times, we just need to learn and manage it throughout the 80 minutes.

“It has been difficult to return to competitive action after a long time away. We’ve tried to work on what we can control but the game is totally different when you’re actually out there on the pitch.”