England got the bonus point with a 29-15 win over Italy, but the scoreline doesn't tell the tale of a match that had a bit of everything 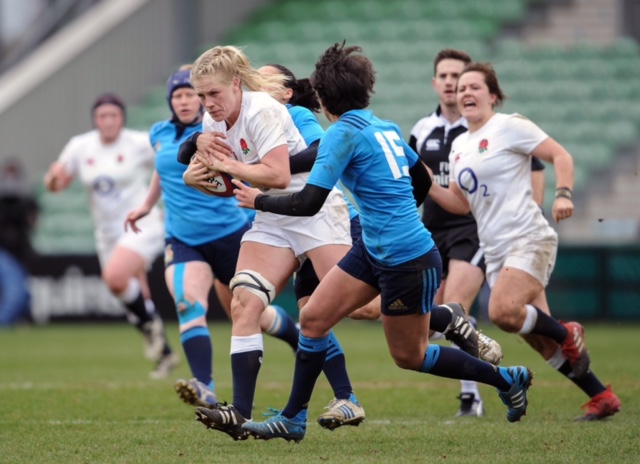 There was a hat trick for Victoria Fleetwood - the first ever by a front row player in the women’s 6 Nations - there was a narrow as you like second half which Italy won 10-5, there were two yellow cards - one per team - and then there was a red card for former England captain Katie Mclean who had just come off the bench.

Whatever the drama, this was Italy’s best performance in England, and though they could have scored more when England were down to 13 players, they will surely be proud of this effort, especially when at 24-5 down at halftime, they threatened to be overwhelmed.

For England’s part, they looked like a team that had had numerous changes made - eight in all - and though there were some fine performances, Alex Matthews, Emily Scarratt and Harriet Millar-Mills in particular along with Fleetwood; they’ll be frustrated at their second half performance, and concerned that they will have lost Mclean for the rest of the tournament.

Losing flanker Cammarano Lucia to injury in the warmup meant an early reshuffle for Italy, who didn’t have an extra replacement with them and who were forced to start with one sub less.

It hardly mattered to how they started. After just minutes, the brilliant scrum-half Sara Barattin broke through from the back of a line-out to race 50 metres. From the resultant penalty, Italy’s forwards did the hard work and a delightful grubber from Manuela Furlan put Sofia Stefan in the corner for a 5-0 lead.

England had plenty of ball but looked rusty in the remaining opening exchanges with Italy’s defence forcing errors. But you always felt England would feel their way into it and they did with a try on ten minutes.

It stemmed from an Italian error with Beatrice Rigoni kicking loosely into the hands of Millar-Mills, whose lovely footwork kept the ball alive. When it spun left, Scarratt showed deft feet of her own to put Kay Wilson away in the corner to make it 5-5.

It was soon 10-5 after the impressive Matthews broke through the middle, and the ball was moved wide into space for Amy Wilson-Hardy to race over.

Italy’s Elisa Pillotti was carded for a high tackle and England made it 17-5 with Fleetwood getting on the end of a well organised driving maul. Fleetwood was over again just minutes later as England secured their bonus point on 32 minutes and you feared the floodgates for Italy.

They managed to hold on to the break though - indeed Rigoni was almost through for a try after an intercept but Scarratt beat her to the chase, and England booted clear for half time.

England’s driving line out had caused Italy huge problems in the first half and so it proved again early in the second half when Fleetwood got her hat trick after another brilliant maul - a score that made the England hooker the first front row player ever to grab a 6 Nations hat trick in the women’s competition.

England were using Matthews to excellent effect out wide and though Italy were fronting up, they were struggling to piece together enough phases to cause any real headaches.

But huge credit to the Italians, who you feared could be overwhelmed from here on in but none of it.

Elisa Cucchiella made a huge impact off the bench and with Furlan and Barattin showing just how dangerous they were out wide, the visitors rallied hard.

It fell to Furlan to add a touch of magic to spark the Italians to life. Nothing was on when she collected the ball on the half way but her pace stood up Wilson Hardy and her lovely dink through caused England problems at the back and with nobody cleaning up, Barattin won the chase to touch down.

England added to their back line width by bringing Katie Mclean off the bench and she made an immediate impact with a lovely break which resulted in what looked like a try for Fleetwod. The try was reviewed and to some surprise Mclean was shown a red card for a reckless tackle and the try was overturned.

When replacement Poppy Cleall was then yellow carded, England were down to 13 players.

Italy had ten minutes to go for it and a solid scrum on the England 22 gave them their chance with Furlan again exploiting the space out wide for Stefan to score.

A bonus point was on but England did just enough to retain the ball of the restart and get rid of the ball for the win.