India gets its first taste of fifteens

Indian rugby took a huge step forward a week ago when the first women's fifteen-a-side tournament was staged by the Calcutta Cricket and Football Club (CCFC) - a prestigious institution, the oldest rugby club outside the UK, and birthplace of the Calcutta Cup. We asked Paul Walsh, coach of the Jungle Crows, and supporter of women's rugby in India, to describe the historic weekend. 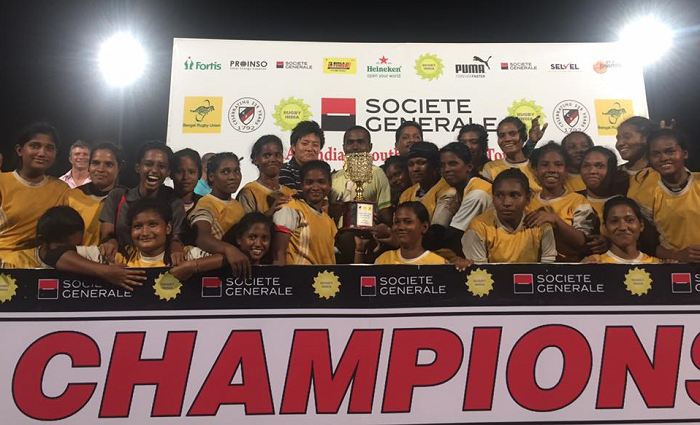 Women’s rugby is today rocking in India with the playing of its first ever 15s tournament from 21 September in Calcutta. Six teams took to the field and played over two match days with a days break in between. The levels of play and excitement were incredible, with most spectators finding the women’s game much more enjoyable than the men’s which were also being played as part of the 83rd All India Rugby Championships.

Day one saw each team play the other from two groups of three. In the first ever game two Calcutta teams faced off with the Jungle Crows overcoming Young Rugby Club 22-0. Next up saw hosts Calcutta Cricket and Football Club (CCFC) overcome the Bihar state team in an identical scoreline 22-0.

Odisha also sent a state team and as favourites set down a marker with a 40-0 thrashing of Young Rugby Club. Delhi Hurricanes started in similar fashion with a 27-0 win over Bihar.

Concluding the first day came the virtual semi finals: Jungle Crows v Odisha and CCFC v Delhi Hurricanes. And real drama was to come, under the lights and in the humidity of a tropical rugby evening.

Odisha and the Jungle Crows were both looking to use their speedy backs and fast hands against each other while CCFC and Delhi were relying more on size and strength.

In the first game Odisha eventually made the breakthrough as a kick to the corner took a devious backward bounce over the Crows defenders to fall into the hands of a grateful Odisha chaser. 5-0 for the win.

CCFC and the Hurricanes bashed each other up in midfield but neither quite had the pace to exploit occasional overlaps. In a late driving set of rucks the CCFC defence gave in and it was 5-0 to Delhi for the win.

Odisha to face Delhi Hurricanes in the final and Jungle Crows to face CCFC in the Plate. The contrasting styles would now go at each other.

The second day of play had as an opening the 5th/6th place match which the Bihar team took 5-0. Kudos to them as the least experienced group of players, but they learnt quickly and showed lots of passion and enthusiasm.

Next up was the Plate final with CCFC taking on the Jungle Crows, a classic all-Calcutta fixture for the men but now for the women also. A nervy start from both teams with the tension evident. Such games may not make headlines, but the women showed a commitment that had coaches, spectators and officials enthralled. Eventually the speedy Crows found some space wide and were able to take control of the fixture with a 20-0 win. Would the final end similarly?

A real cracker that again saw both teams not really making much headway until Odisha managed to create space wide, which was clearly their game plan. Sending the forwards up once or twice and then spinning the ball wide at speed – their fast hands and lovely long passes showing their teams star quality. Tournament top try scorer Hupi Majhi bagged two more tries and the final ended 20-0 to Odisha.

Favourite Indian actor Rahul Bose was on hand to present the trophies, a fine player himself back in the day and the current ‘face’ of Indian Rugby. There was absolutely genuine praise for all the players who had put on a very fine show and delivered excitement, great play and super teamwork.