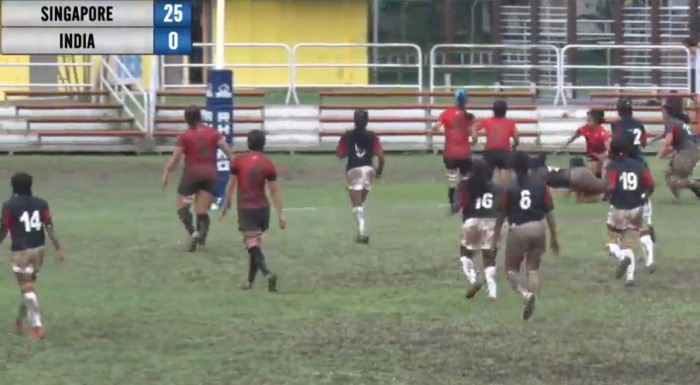 The Asian Division 1 Championship is an important step forward for Asian rugby. While Japan and Hong Kong play regularly – and Kazakhstan have now returned to international rugby – there have been few opportunities for the rest of Asia to play international XVs. Before this game Singapore – historically the most active team outside of the Big Three – had not played any tests since 2016, and had not won a game since 2013.

Conditions for the first test in this three-game tournament at the Queenstown Stadium were less than ideal, with a tropical storm prior to the match soaking the ground, setting up the game for a forward-based attritional battle that would inevitably favour the more experienced home team –the most experienced Indian players have only been playing fifteens for two years, even at club level.

Meerarani Hembram kicked off India’s first test match. Singapore had most of the possession, and dominated the set pieces, from the start, but handling errors and an impressively disciplined Indian defence ensured they remained scoreless. When they did get any possession, India looked to have superior speed and handling skills – but their opportunities were limited. Nonetheless after 15 minutes a great run by Indian wing Hupi Majhi was the game’s first scoring opportunity, only a try saving tackle from her opposite number Tse Min Yan kept her out.

Ten minutes later Singapore should have scored, but Mery Ong knocked-on on the line, but Singapore kept the advantage and after 37 minutes Tse Min Yan scored the first try in the corner, ending one of the few attacking moves from their backline. A second try followed right on halftime, a high tackle by India giving away a penalty close to the Indian line, Singapore scoring from the resulting lineout. 10-0 was the score at halftime.

With the pitch cutting up more and more, India found themselves even more trapped in their own half, with clearance kicks invariably failing to find touch while the appearance of prop Jackie Lea Osborn for Singapore – by a margin the largest player on the field – gave the home side even more of an advantage.

Ten minutes into the second half second row Anna Chen extended the home side’s lead further crashing through the Indian defensive line. With Singapore now in total command, No 8 Annabel Woo then added a fourth try just before the hour, and 18 year-old Lin Ke added a fifth five minutes later.

With five minutes left India finally broke out of their own half. A handling error by Singapore allowed Hupi Majhi to kick ahead into the Singapore 22. It was now India’s turn to put on pressure, and quick recycling saw the ball find its way to Neha Pardeshi who dived through a gap in the Singapore line for India’s first try in test rugby. There was, however, still time for one more Singapore try from Tse Min Yan. Final score – Singapore 30, India 5.

India's next test is just three days away...