Having firmly established herself as England’s starting number nine, Leanne Infante will be a vital player for the World Cup favourites in the coming weeks. We spoke to the scrum-half about the build-up and her expectations. 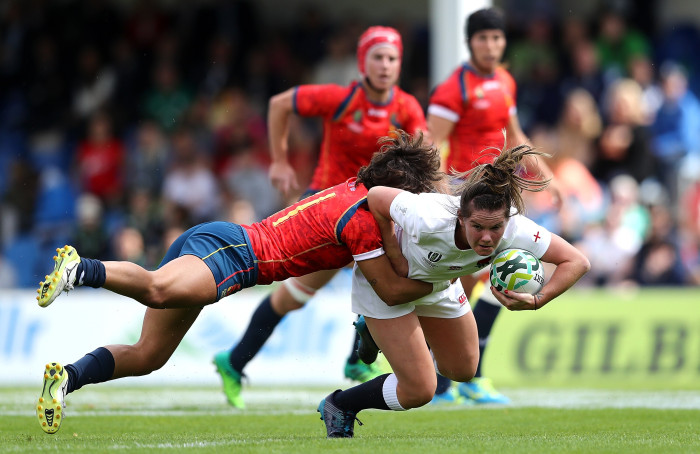 When the final whistle went at England’s last training session on home soil before the World Cup on Wednesday last week, Leanne Infante concedes to feeling a huge sense of relief.

England were finalising their preparations before heading to New Zealand on the back of a record 25 match winning streak, and all the build-up, at least at home, was over.

“The last few days before we flew had been really busy and the week before had been so full on as a game week and with selection on the horizon,” she said.

“When that whistle went on Wednesday, you could feel the relief. For those of us going, we’d done everything we could do ahead of the journey so it was good to get through it, finish up and then think about the last bits you needed to do before travelling.”

Infante is now the clear first choice for Simon Middleton, having travelled to the 2017 World Cup third in the pecking order behind Natasha ‘Mo’  Hunt, and La Toya Mason.  This time Hunt was left out, with Infante being joined by Claudia MacDonald and Lucy Packer as the group of scrum halves.

“I think for everyone who missed out it was a huge blow and we all felt it. We have been together since the start of July and I am very close to Sarah Beckett who missed out and obviously you really feel for them.

“I think they have all been amazing despite their disappointment. The news came out and most of them put a good luck message into our group chat straight away and others when they were ready.”

Hunt’s omission was headline news when the squad was announced, and Infante says it’s hard to know how best to reach out when someone in your own spot is left out.

“Mo is a competitor of mine and so it’s been a tough relationship between us."

"After the squad was named I did feel awkward initially because I just felt you might not want to receive that message from someone going in the same position as you, however she reached out when she was ready and I replied, and I hand on heart believe everything she and the others have said about backing us all 100% however they might be feeling. And anyway, it’s a long stint away and anything can happen.”

Apart from the France game in April, where England had to come from a score behind, England go into the World Cup having dominated teams in recent years. Infante says that their own training sessions have helped work on things that might not get thrown at them but which might prove key in New Zealand.

“We get a lot out of our own training environment.  We go head on head with each other 15 on 15 in training and the programme has allowed us to do that recently and that is huge for us.

“All the games we play are physical, though on the score line it might not reflect that.  France this year though – that was an extremely tough game in every respect and when we played them down in Exeter we beat them by a score, so we have had closer games recently and I think with Fiji, South Africa and France in our pool, this is going to be pretty physical.

Infante has made her mark as a brilliantly organised, controlled scrumhalf, who can hold her own in attack and defence, and who perfectly marshals a powerful England pack around the field.

Extremely vocal on the field, I suggest that she is the kind of nine that teams must loathe playing against.

“Well I agree that I can be annoying on the field,” she laughs.

“My family turn the volume down when they watch me on the telly. Look, I always go into games thinking, I’ll try not to be as loud today but my adrenaline takes over. I play with a lot of energy and I see my primary  job as being there to help my pack and marshal them – they get through so much work and so I try and bring that voice behind them so they don’t have to look where to head next. I try to drive that and then to work with the backs so they get clean, quick ball.”

Infante is excited about the World Cup though admits she has some concerns about the unknowns.

“Being away for so long – I am a bit anxious about it. There are still some Covid protocols, and they are changing all the time so that makes it a bit uncertain. I have friend and family coming but we aren’t quite sure how much contact we can have with them. It will be a tough time but hopefully completely worth it.