After the better part of a decade, official international club rugby returned last weekend when the Spanish and Portuguese champions  met to decide the first Women’s Copa Ibérica Iberdrola. 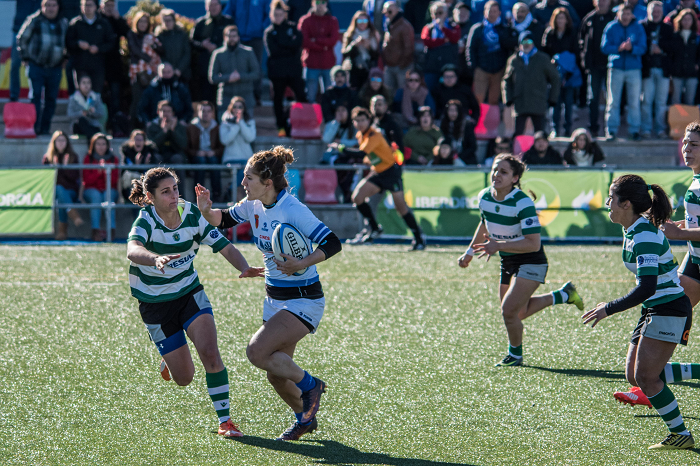 After two years, and with no interest being shown by any of the Home Nations, FIRA (the forerunner of Rugby Europe) quietly shelved the experiment, leaving women’s rugby as the only major team sport to not have any form of official cross-border competition.

That changed this weekend when the champions teams from Spain and Portugal met for the first time to decide the first women’s “Copa Ibérica Iberdrola”.

The “Iberian Cup” (in English) has been a fixture for the national men’s champions of Spain and Portugal for over 50 years, but pressure from within the women’s game – helped by the sponsors – finally resulted in last weekend’s fixture where Olympic Pozuelo from Spain took on Sporting Lisbon in Valle de las Cañas.

Sporting started as significant underdogs as their national championship was a sevens competition – but fifteens is played in Portugal, and Sporting arranged a series of games against Spanish and French clubs sides in preparation for the match.

It was preparation that certainly paid off. Although Olympic Pozuelo won 27-15, Sporting lead in the first half, and it was only in the final quarter that Olympic - captained by Amanda Prado - managed to pull away.

As soon as the first half began it was clear that the game would be far closer than many pundits had suspected, although a ninth minute break by Olympic’s Cristina Blanco soon had the Spanish champions on the borad. Despite this set-back the Portuguese response was immediate and they managed to combine several good phases with their two props - Tania Semedo and Leilaini Perese – causing problems for the Spanish team. And after 16 minutes it was the pace of wing Julia Araujo who got Sporting on the board – and then six minutes later she did it again, and the unfancied Portuguese were ahead.

The final minutes of the half two tries for Olympic from Eva Aguirre and Nerea Barrio – aided by some well-placed kicks from Irene Schiavon – put Olympic back in the lead. At the half they lead 17-10.

After the break, the Sporting players came out on the pitch with revived determination and on 49 minutes, Leilaini Perese used her power to pull Sporting back to within two points of Olympic.

But in the end it was perhaps experience that told, as Olympic dominated the final quarter. They were first rewarded with a try from Eva Aguirre – converted by Schiavon – after which a penalty from Schiavon with ten minutes to go extended the lead to what would be the final score, 27-15 to Olympic.