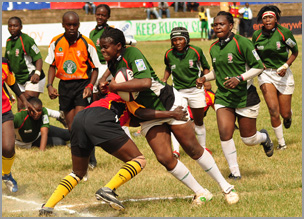 The IRB have begun a major push for the development of womens rugby in Africa.

The workshop focused on increasing the participation levels of the womens game throughout the African region as well as on development, education and training in the womens game.

Carty said: I had the pleasure of visiting Uganda first and this visit marked the beginning of a trip to East Africa with the purpose of putting together clear development pathways around the women's game, including refereeing, coaching, administrators as well as players.

The region is key in the IRBs strategic investment programme and will receive a significant contribution from the IRB to grow the game across all forms. It was exciting to be in Uganda at this time, and help formulate their long-term goals and objectives.

In Uganda, Carty held a series of meetings with the county's rugby officials, the National Olympic Committee and the Minister for Sport, to press the need for commitment to further develop womens rugby in their country.

Uganda took a major leap last year at developing themselves as an international womens force when they competed at the Rugby World Cup 7s and they also play annually in the Elgon Cup competition fixtures against Kenya.

Africa is a major market for the expansion of womens rugby and rugby sevens following the Olympic decision in October 2009, Carty added.

In Johannesburg a major womens rugby workshop with nine African unions was ran with the focus on developing strategic frameworks for each of the nations present to move their womens game forward.

We recognise that they (SARU) can take a lead on the development of women in the game across both the CAR region and in the country by implementing their existing good practice structures to the women's game, Carty said.

South Africa is certainly the most advanced African womens rugby nation, competing regularly in womens competitions at both 15 and 7 aside. They travelled to Canada to the Nations Cup last year where they fared well against more established sides like England and France, and they are the African representatives at the Womens World Cup later this year.

The development of the womens game in the African region is long overdue with no major international competition currently ran for the area. While the IRBs focus will be on developing the sport at grassroots level first and foremost, investment and a focus on the 7s games means the womens game has the potential to significantly grow there in the years ahead.