Ireland bounce back in some style 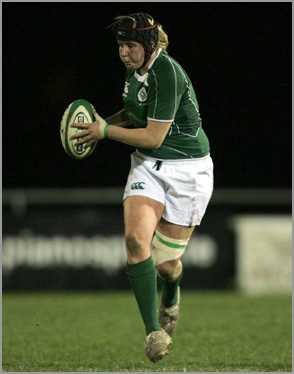 Ireland bounced back in some style from two defeats in as many games with a stirring 18-3 defeat of Wales on home soil. Tries from Niamg Briggs, Tania Rosser and Joy Neville helped Ireland to a comfortable win as Wales could only reply with a penalty from Non Evans.

Ireland led 5-3 at the break. Evans had pushed the away team into an early 3-0 lead but though Ireland fullback Niamh Briggs missed an early penalty, it was her try that gave Ireland the half time lead over the current triple crown champions.

The score was an excellent individual effort and saw the fullback race half the length of the pitch before touching down in the left corner.

Kevin West's side grew in confidence and they were they held their composure during a fragmented spell coming up to the break, when hooker Chris Fanning was flashed a yellow card and Wales captain Mellissa Berry followed her into the sin-bin, eight minutes later.

Having gone close to scoring a second try on the stroke of half-time - Briggs fumbled possession after a good set-up from flanker Claire Molloy - Ireland cleverly pinned Wales back early in the second period, robbing them of field position and edging the battle up front.

The game hung in the balance after a slow first half and was up for grabs till just before the hour mark when Ireland scrum half Tania Rosser made a fine break and skipped through the Welsh defence to touch down.

Briggs came close to scoring her second try - the grounding was not sufficient for the match officials - but the Clonmel star followed up with a 72nd minute penalty.

Yet Ireland finished the game in style with a late pushover effort from hard-working back rower Joy Neville, whose third try of the campaign moved the winning margin out to 15 points and rounded off Ireland's fourth win in 15 meetings with Wales.

Wales will now be looking to finish their campaign on a winning note when they tackle Italy in the final game of their campaign next weekend at Bridgend while Ireland are looking at a top three finish depending how they fare against Scotland next weekend.

Wales coach Gary Parker said. We were in control for the first 25 minutes of the first half but we then gave away a soft try before giving away a series of penalties late in the first half. We gavefield possession away which handed momentum to them, he said.

In the second half Ireland came out and played a kicking game and pinned us back and we couldnt get out of our own 22. To be fair we defended really well but we fell off a couple of tackles out wide and you could see Ireland grow in confidence.

The bottom line is we werent good enough. We lost the contact area and lacked composure and we have to take a long look at ourselves. We arent doing the simple things well at the moment. We are not quite firing on all cylinders like we did last season.