Ireland get off the mark

Ireland got their first win of the Six Nations with a 21-8 over Italy on home soil. 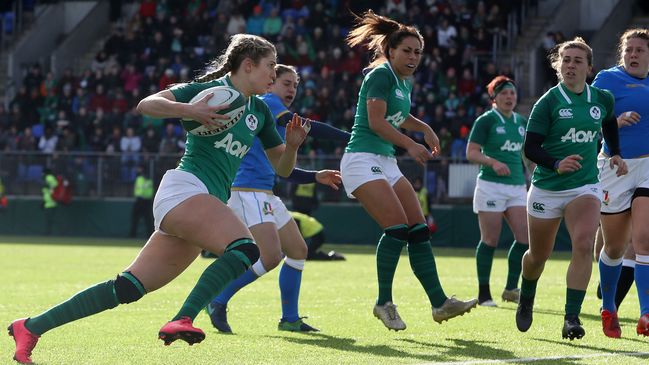 Two tries from skipper Ciara Griffin and one from Megan Williams was enough to secure a win, in a game where the home side had to wait till late on to put a dogged Italian side away.

Major positives for Ireland were the performances of key players such as flanker Claire Molloy and captain Griffin, while there was much improvement in the backs where Katie Fitzhenry showed her attacking ability in the wide channels.

Italy will be disappointed to have taken nothing from a game where they had plenty of chances and for whom debutante lock Giada Franco was outstanding from the bench and as ever Manueala Furlan and Beatrice Rigoni threatned on numerous occasions.

An early injury-enforced departure of Alison Miller with a compound ankle fracture, was a blow for Ireland but they were soon off the mark.

Although numerous attacks were halted by knock onsbut from an Ailsa Hughes turnover off a scrum, Ireland struck for an opening 10th-minute try. Fitzhenry's break helped set up Williams for a good finish and the opening try of the game.

Niamh Briggs converted in the swirling wind. The try woke Italy up with a superb break from Furlan bringing them into the Irish 22 before Molloy came to Ireland's rescue with a turnover.

A stop-start second quarter, which had a series of injury stoppages, was played mostly in the Irish half. The error count increased for both sides, and Maria Magatti's persistence in retrieving a kick paid off when her centre partner Sillari punished Peat for not rolling away with the last kick of the first half and got Italy on the board with a penalty.

The game started to open up as Furlan again split the Irish defence, the Italians also boosted by the carrying of influential replacement Giada Franco, who was excellent.

The hosts had a prolonged purple patch past the hour mark, the forwards setting up camp deep inside the Italian 22. Anna Caplice impressed by winning a penalty at the breakdown, while the tireless Lindsay Peat consistently punched holes with her carrying.

The second try continued to evade Ireland with two knock-ons in quick succession, the first by Briggs when Naoupu took the wrong option to pass when she could have made it over the try-line herself.

However, all the hard work finally paid off in the 67th minute. There was no sign of a yellow card from referee Tim Baker despite Italy's concession of four successive penalties in their 22. It was Peat who drove up close before Griffin got the touchdown from close range.

Now growing in influence, Briggs curled over the conversion and it was the experienced out-half who was just held up in the 75th minute after Williams, Peat and Lyons were all prominent as carriers.

The scrum provided the platform for Griffin's second score soon after, as a strong shove and good control from the number 8 at the rear saw her plunge over to push the gap out to 18 points after Briggs knocked over the conversion in her final act.