It took 82 minutes for Ireland to secure a try scoring bonus point against Italy, but the 27-3 win means they sit top of the 6 Nations table after two rounds. 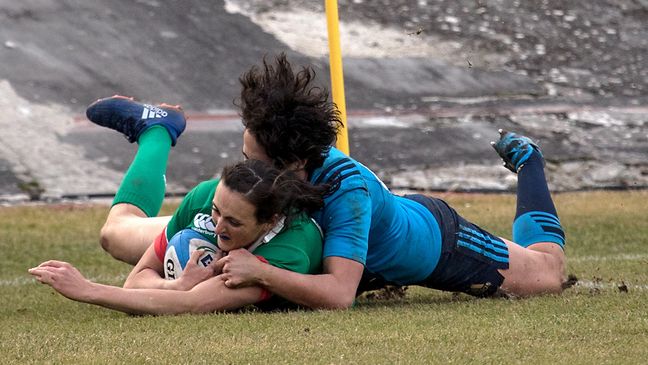 With the scoreline reading 3-3 at halftime, Ireland replied with three second half tries in 15 minutes and then Hannah Tyrell finished brilliantly with the clock in red to ensure they took the maximum return in the dying seconds, just like last weekend against Scoland.

In a poor first half, the only scores came from Nora Stapleton (27 minutes) and Michela Sillari (40) with two penalites though there were some nice touches from Tyrell, more familiar in an Ireland 7s shirt.

Sara Barattin continued to be Italy's best player from scrum-half as she so often is, but Ireland had more than enough chances to push for scores in the opening half but were let down by numerous handling errors.

On the wing, Alison Miller looked a threat for Ireland and at one point did race up the wing and looked like scoring in the opening half only for Barattin to chase her down and kill the chance.

Claire Molloy, Ailsa Hughes and Leah Lyons were all held up in successive phases over hte line  and after Alice Trevisan was caught offside, Stapleton kicked Ireland into the lead.

Indeed, it was the Italians who forced the issue coming up to the interval, a Sofia Stefan break up to the Irish 22 showing their intent and Hughes' loose pass from a scrum giving the home side a close-in scrum.

An offside call against Lindsay Peat allowed Sillari to draw Italy level off the kicking tee, while Jenny Murphy had a short spell off the pitch after taking a heavy hit from Rigoni.

Ireland had no end-product to show for some encouraging build-up play on the resumption, Murphy and Tyrrell both running hard into space and Mairead Coyne's knock-on let Italy off the hook.

The breakthrough finally came in the 51st minute, the Irish pack wearing down the home defence and hooker Lyons managed to ground the ball against the right hand post for a try which Stapleton converted.

Another seven points following just three minutes later, Miller doing the initial damage with a trademark burst in off her left wing. Prop Peat did really well to support her and with possession retained, replacement Spence rumbled over from close range.

A terrific turnover from Ciara Griffin then launched Ireland downfield on a dangerous counter, Miller linking with Naoupu whose looping pass found Peat who was really growing into the game.

Italy defended doggedly but it was obvious that they were tiring, and from an Irish scrum in the 22, centre Murphy went close before skipper Fitzpatrick burrowed over for an unconverted effort.

The chances kept coming but Ireland's accuracy was slightly off as Murphy, who made two powerful breaks in quick succession, just failed to link up with Coyne, and Molloy's pass to Stapleton was adjudged forward with the Italian defence under huge pressure.

It looked like Ireland would miss out on the bonus point when Italy successfully disrupted after another slaloming surge through the middle by Molloy. However, with time up, a final penalty allowed Ireland to build from the back through Stapleton's clever kick. After waiting to gather the bouncing ball, Tyrrell took off on the outside of two defenders and then outfoxed covering full-back Manuela Furlan to finish her thrilling solo score in the right corner.