Ireland too good for Italy

Ireland bagged their first win in this year's Six Nations with a comfortable home victory over Italy. 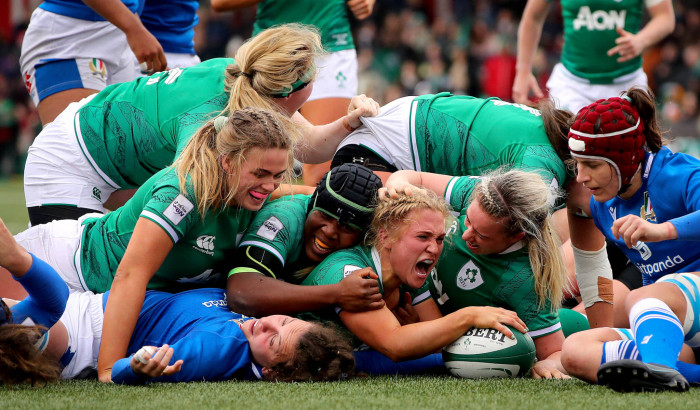 The final 29-8 result in Cork was well deserved as Ireland dominated a disappointing Italian team who struggled to get into the match at all.

Italy started well enough when impressive centre Alyssa D’Inca broke away into space and from the ruck, a penalty was won and the impressive Beatrice Rigoni booted her side into an early lead.

That was as good as it would get for a while for the visitors though, as Ireland grew into the game, with Eve Higgins, Neve Jones and Sam Monaghan in particular all prominent.

Their reward finally came when fullback Lucy Mulhall was put over in the corner by a brilliant pass from Nicole Cronin.

Murphy Crowe was then denied what looked to have been a fine score when the referee deemed she had been tackled and not released before dotting down despire replays showing she had not been held, but either way Ireland got over again a few minutes later when Jones got over from a rolling maul to make it 10-3 at the break.

Ireland totally dominated the second half to secure the bonus point. Higgins latched onto a lovely box kick from Kathryn Dane, collecting and then racing home to make it 17-3.

Then Ireland were rewarded with a penalty try - a huge coup for the Irish pack who had struggled badly against France last weekend.

Italy did get a consolation score. D'Inca made a brilliant break through the middle and then when Ireland were reduced to 14 after Aoife Wafer was sent to the sin-bin for a dangerous clearout, they got their maul rolling and Bettoni dotted down.

Ireland had the last say though with Katie O’Dwyer taking advantage of a loose ball from a stolen lineout to pounce and crash over.