In a game that ended in terrible conditions, Ireland did more than enough to secure a second win in the 6 Nations, with a 31-12 win over Wales. 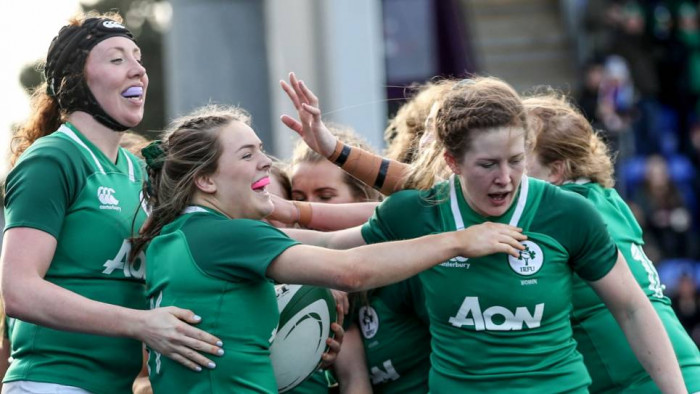 It was a match that started in sunshine but ended in a deluge, but Ireland made it two from two with a fine win over Wales.

Displaying great finsihing skills, Ireland took advantage of the handful of chances they had in the game, especially in the first half when they were impressively clinical.

Wales started the match well and had Ireland under huge pressure back in their own 22 in the opening exchanges. Siwan Lillicrap was carrying well and Keira Bevan was keeping the tempo high, but Ireland's tenacious defence did enough and when their first chance came, they didn't waste it.

Collecting the ball, nothing seemed on for Ireland's exciting teenage winger Beibhinn Parsons, but as she did last week, she showcased her pace and power with a brilliant finish.

The score gave Ireland some confidence with Linda Djougang finding herself in plenty of space alongside fellow prop Lindsay Peat.

Wales were under pressure now with Ireland coming forward consistently, and when hooker  Cliodhna Moloney latched onto a pass from Sene Naoupu, she was able to power home for her second try for Ireland in a week. Claire Keohane made it 12-0 with the conversion and then Ireland added a third through wing Lauren Delaney - another great finish out wide to push the lead out to 17-0.

Wales finally got back into it when Bevan, who had a really strong game, took a fast tap and go and from the ruck 5 metres out, Lauren Smyth dived over.

The cherry on top came in the final play when Ireland's scrum work was awarded a penalty try.

Ireland's backrow players especially Anna Caplice and the replacement Dorothy Wall had key games for the host, while Ireland's back three combinations look extremely clincial. Moloney was the well deserved player of the game.

In Bevan, Lillicrap and Lake, Wales had players who battled throughout but as per last week, they failed to take their chances and were never able to really capitalise on the patches of the game where they had momentum.  Alisha Butchers was also outstanding - with 30 tackles in the game and some powerful carries.