Ireland win on the road in Glasgow

Ireland got their campaign off the ground with a 5-22  win over Scotland in poor conditions in Glasgow. 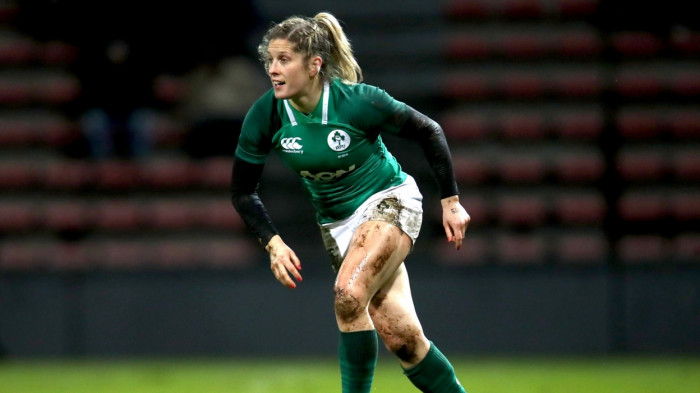 It was to be another disappointing night and result for Scotland, who with Italy and Ireland now played, will know they face an uphill struggle to get anything from this tournament.

The conditions made life difficult for both sides, but Ireland's finishing was improved from last weekend and they did enough to take home a well deserved bonus point.

Ireland got off to a flying start when Aoife McDermott crashed over after just five minutes of early dominance.

But if it appeared early on as if Scotland were going to find the going tough as they faced wave after wave of Irish attack, they in fact grew into the game to the delight of the home crowd.

Helen Nelson and Chloe Rollie combined to help Scotland into the 22 and when the Scottish pack were held up over the line, the hosts opted for a 5 metre scrum from the resulting penalty. They were rewarded when Hannah Smith raced over, having spotted space down the blind to level the game up.

Ireland had the best of the remaining chances in the rest of the half with good breaks from Alison Miller and Ailsa Hughes but Rollie was on hand to make some thundering tackles and the visitors were guilty of kicking away and dropping far too much possession.

Ireland kept going though and on the brink of half time Leah Lyons carried forcefully and powered her way over with help from Laura Feely to give her team 5-10 lead at the break.

Ireland made a strong start to the second period with pressure immediately coming in the Scottish 22. A quick tap from Hughes helped suck in the Scottish defence and Miller found space out wide to score.

Lyons continued to impress with her carrying and rucking game and as the rain teemed down, chances became harder and harder to come by. Ireland's scrum though, which had been dominant, won a turnover and off it the Irish pack worked through the phases in the 22 and finally the hard working Caplice went over for a bonus point score.
Scotland had a couple of opportunities but were too wasteful when faced with Ireland's defence under pressure, and after an hour Irish coach Adam Griggs had the luxury of taking off some key players including Miller, Caplice and Claire Molloy.

Lana Skeldon impressed again for Scotland and though she had limited space, Smith continues to be a key strength in midfield.  Caplice was named player of the match, though in truth it could just as easily have gone to Lyons, who had a standout game at tight-head having played hooker last weekend.

With France to come left, it doesn't get any easier for the Scots, while Ireland will look foward to hosting a much improved Italy side.