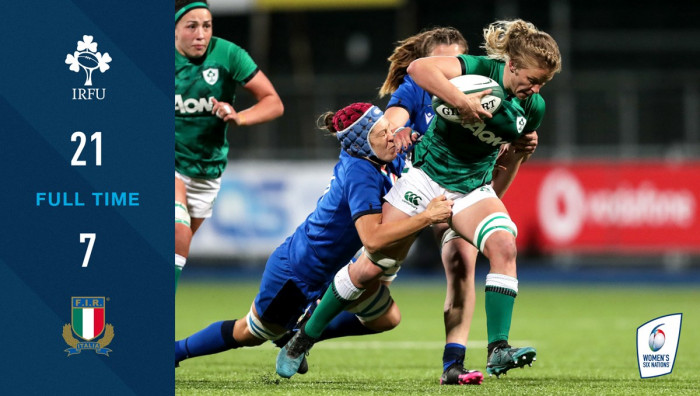 Some 230 days after the last women’s test match, Italy and Ireland took the field in Dublin this evening in the first of this autumn’s Six Nations games after the spring postponements.

Most of the players had played very little competitive rugby in the last seven months. Irish domestic rugby only returned a few weeks ago, and the Italian leagues have yet to start at all – though several Italian players play in France. That lack of competitive match practice is probably the best explanation for what at times seemed an error-strewn game. 18 official handling errors were shared by both sides, but at times there seemed more, and these invariably seemed to come at crucial moments.

Italy began well and it was the experienced Melissa Bettoni who scored the first try after 15 minutes, almost all of which had been in the Irish half. 0-7.

It was a score the Irish seemed to respond to better, and they dominated possession for most of the rest of the half. But those handling errors now came into play with several scoring opportunities wiped out before Lindsay Peat – who had a great game – finally crossed the line after 31 minutes. 7-7.

It was at this crucial moment that match practice and poor decision making came to the fore as Munela Furlan retrieved a somewhat innocuous Irish clearance kick just inside her own 22 under no real pressure, but simply took too long, finding Béibhinn Parsons was on top of her before she could clear the ball. Italy never got out of their 22 for the rest of the half, and Claire Molloy scored Ireland’s second try from the final play of the half. 14-7 (HT).

Much of the second half was a decidedly scrappy affair with neither side getting on top of a game that was open to be decided by the next score. The Italian pack had its moments, only to be let down by – again – poor handling and hesitant decision making. Both sides were also very poor at set pieces. Line outs in particular became a lottery – despite this being a fairly still night - with 11 out of the games 30 throws being lost and scoring chances being missed by both teams.

Finally, with 10 minutes to go, Ireland refound the form that they had ended the first half with, aided by again Italy being slow and hesitant this time over what should have been a routine clearance kick that was instead charged down, the resulting 5m scrum winning Ireland a penalty try. 21-7.

The last minutes of the game saw Italy try to at least snatch a bonus point, and again they had their chances, and again they were missed as much from errors as much as Irish defence (although pressure from the latter was often the cause of the former). In the end Ireland cleared their lines, and sent the ball into the empty stands to win the game.

On her return to the Irish team, Molloy was a standout and was named player of the match. Watch highlights here.