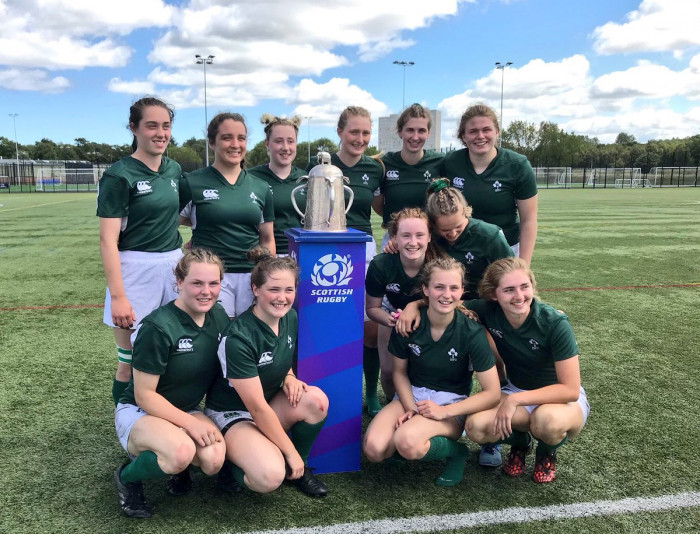 Triumphant Irish team (with a trophy that is not the Home Nations trophy!)

Ireland had selected a strong team with Anna Doyle and Dorothy Wall, who co-captained the Ireland Women's Under-18s to European bronze earlier in the year, leading a team that included seven other members of the team that played in Vichy are included

Coached by Adam Griggs and managed by Elaine Ryan, the team were unbeaten across the weekend. They topped the pool with increasingly impressive performances over the day, beginning with a 28-19 win over England, following that by beating Wales 22-5 and ending with a big 47-10 win against Scotland.

They maintained that performance on the second day with a 29-14 semi-final win against Wales before the final against England.

Wales had a far more difficult opening day, but fought back to end third overall

Despite this they lost all of their pool games but produced their best performance in the third place game, racing to a 17-5 lead at halftime before fighting off a Scottish comeback in the second half to win 22-17.

In the final two tries gave Ireland a 14-0 half-time lead. England pulled back to 14-10, but a third Irish try near the end of the second half confirmed their title.

England: No squad details published by the RFU.

The second leg of the Home Nations U18 Sevens tournament will take place at Birmingham University from 20th-22nd July.