There were wins for Old Belvedere, Galwegians, Railway and UL Bohemians in round 5 of Ireland's top league. 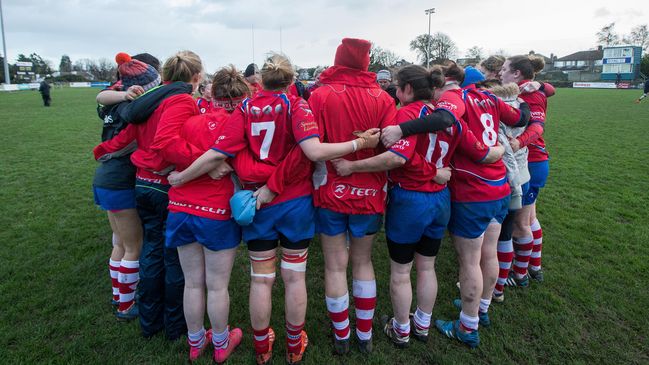 A pall of sadness and grief hung over the country’s rugby grounds as word came through from Paris of the sudden death of Munster coach and legend Anthony Foley, just as the fifth round of games in the women’s All Ireland League kicked off.

Pacesetters UL Bohemians were at home to St Mary’s in the Treaty City and they rain in in six tries for a bonus point success that keeps them a nose in front of their pursuers.

A five try salvo in 20 minutes midway through the first half gave the home team a lead they never relinquished. UL Bohs’ much vaunted backline showed their worth with Liz Burke and Ireland captain Niamh Briggs scoring a brace and Deirbhile Nic a Bhaird adding the fifth on 33 minutes.

Understandably, St Mary’s took a little time to regain their composure having opened the scoring and matched their hosts before UL Bohs let rip. Half-time substitute Orli Schlachter made an impact at prop forward for the Dublin side and scored St Mary’s only try, which was converted, and they managed to hold the home side to a single try in the second half when Liz Burke ran the length of the pitch for her hat-trick try and a 36 – 10 victory for the league leaders in a game that was much more competitive than the scoreline suggests.

Last year’s champions Old Belvedere moved up to second place after their 45 – 14 victory over Cooke in Belfast. The Dubliners were in full attacking mode once again and their firepower allowed them to outpoint Cooke and leapfrog Galwegians in the league because of their vastly superior scoring difference.

“It was nice to kick on from last week and build on that success,” said Ruth McElroy.

Ireland’s flying bolt on the wing Ali Miller helped herself to another three tries but first blood went to Cooke, who went a converted try ahead before Old Belvedere cranked into gear.

Maria Kenny, making her debut, at full-back was as assured as a veteran under the high ball and burned up the field in attack and she was the catalyst for Old Belvedere’s opening try.

Linda Doujoug, with three Cooke players clinging to her, determined to thwart her, barreled over the line from a line out move to help her side to a 31– 7 lead at half-time.

The second half was a more even contest and Miller and the travelling fans were forced to wait until the hour mark for a score, courtesy of Miller. Cooke were relentless in their pressurizing and got the score their efforts at least deserved when blocking an attempted clearance from a scrum inside the Old Belvedere 22.

With the final play of the game, Nora Stapleton’s quick thinking and quick feet added a sixth try for Old Belvedere to leave them two points behind UL Bohemians.

Galwegians had a single point to spare over Blackrock in Galway and the westerners were left biting their nails as the clock ticked towards full-time. The game came right down to wire with Carmella Morley’s try bringing the score to 13-13 in favour of Galwegians with the conversion still to come. A very difficult kick, made more so by the wet and windy conditions, the ball drifted away from the posts much to the relief of the home team, who clung on to win thanks to Mairead Coyne’s two unconverted tries.

In another high-scoring affair Railway Union hit Highfield for six tries recording their first win after three successive tight losses., Lindsey Peat getting a brace, as they defeated the Cork team by 36-17.

Report thanks to Aisling Crowe

“We are finding our way back,” remarked Railway’s director of rugby John Cronin. “It has been very frustrating with three losing bonus point defeats in a row over the last few weeks so this win was very important for confidence.”