UL-Bohemians maintained their perfect record with a win over Galwegians while there were also victories for Highfield, Blackrock and Old Belvedere 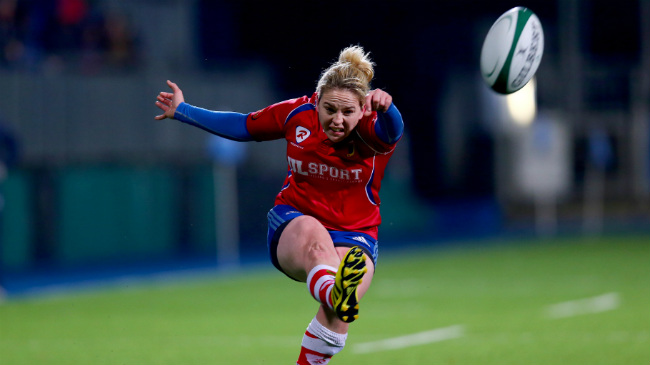 Crowley Park in Galway was the setting for Saturday evening’s showdown between the only two teams with perfect records in the league. Galwegians were defending a two point lead over the game’s behemoths UL Bohemians at the tope of the table, and with so much at stake, even this early in the season, a fierce fight for supremacy was guaranteed in the city of the tribes.

It is the Limerick tribe who hold the best hand after a bruising encounter between two sides in the habit of winning. Hard hits and heavy knocks as both sides pummelled each other looking to score that knock out blow which would keep their unblemished records blot free.

UL Bohs made the much better start in their quest for glory with outside centre Deirbhile Nic a Bhaird crossing the white line for a try after 10 minutes. Ireland captain Niamh Briggs added the conversion.

The Limerick women kept up intense pressure on the Galwegians defence in a war of attrition and eventually, the Galwegians lines cracked a minute before half-time. Rachel Allen, not that one but the UL Bohs inside centre, powered her way across the line along with the Galwegian defenders desperately clinging to her.

Galwegians were unbowed and went into the dressing room at half-time with three points on the board thanks to a Nicole Fowley penalty on the half-time whistle.

Re-energised by that score, Galwegians tore into the Limerick team in the second half, pinning them inside their own 22. Five minutes in, Sarah Jane Fox scored a try for the home side that was converted by Fowley to bring them within two points of UL Bohs.

Sustained pressure from the home team could not be converted into scores and a Briggs penalty on 50 minutes eked out a five point gap for her team who were forced to continually rebut the Galwegians’ attackers to close out victory and take over at the top of the league table. Only a solitary point separates the two teams as Galwegians claimed a losing bonus point.

Smarting from losing their own unbeaten record to UL Bohemians last time out, Old Belvedere were in no mood to brook opposition at Anglesea Road on Sunday afternoon.

The reigning champions were intent on regaining the winning thread and St Mary’s were their victims, on the wrong end of a 65 points to three drubbing.

“We could tell in the warm up that it was going to be different today,” said replacement prop Ruth . “All the long passes and pops we attempted to make the last day that didn’t come off were sticking today. Everything really fell into place for us today and everyone connected with each other.”

Old Belvedere were helped by the return of some heavy artillery in the backs with Irish stars Nora Stapleton and Jenny Murphy making their first starts of the season along Jackie Shiels.

St Mary’s were not frightened by the prospect of facing the firepower in the Belvedere ranks and dominated the opening exchanges, forcing the home team onto the defensive from the kick off. It was the visitors who opened the scoring, a penalty in Old Belvedere 22 for not rolling away was converted but that was to be the only points St Mary’s would score for the 80 minutes.

Old Belvedere hooker Jenny Finlay got on the end of a wonderful take from the restart by prop Ailis Egan and scored the first of her two tries. Ireland winger Alison Miller claimed four of the Old Belvedere try haul with Francisca Clappoth also getting a brace for herself and Stapleton scoring and converting her own try to help the team to a bonus point success, which leaves them in third place just two points off UL Bohemians.

The most northerly and southerly teams in the league clashed at Woodleigh Park in Cork on Sunday afternoon and the result was a victory for the southern side. Highfield of Cork beat Belfast’s Cooke by 14 points to seven with Laura Guest beating Grace Davitt in the battle of the Irish internationals turned coaches. It was a first win of the season for Highfield and moved them off the foot of the table.

Railway Union sunk to the bottom following their loss on Saturday evening away to Blackrock. They began the game brightly and took an early lead over their hosts with Clionadh Mooney’s try putting them ahead.

Blackrock responded but an immense defensive effort from Railway Union kept them out, three line outs on the five metre line resulting in no points.

Aoife Tyrell’s early second half penalty gave the home team a foundation to build upon and scrum half Niamh Griffin’s darting run from a ruck five metres out put Blackrock into the lead for the first time. Katie Norris scored the decisive second try to give Blackrock a five point victory, 13-8 the final score at Stradbrook.

Report thanks to Aisling Crowe