Italy on top in Cardiff

Despite some magnificent defence by Wales, Italy gained a deserved 19-15 victory in the opening game of their Six Nations in Cardiff 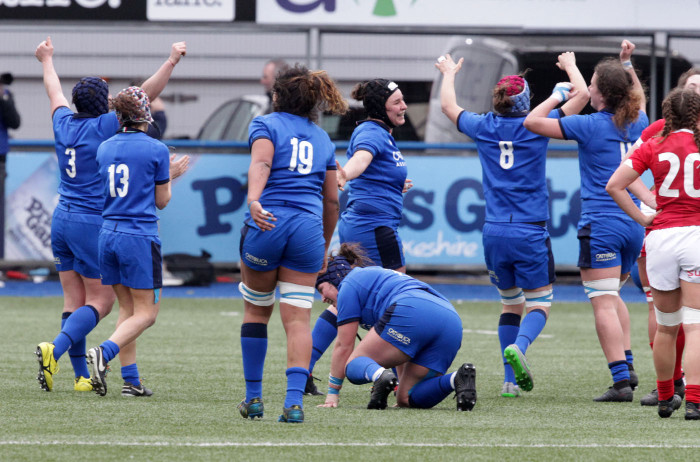 Wales began strongly and at times looked like they could steal the game, but in the end they came up short against an Italian team that had nearly two-thirds of possession throughout the 80 minutes.

The Italians eventually triumphed by three tries to two, but were forced to defend for the lives at the death as Wales looked for a winning score.

However it is instructive that four times Italy looked like have added to their try count, but four times the TMO went the way for Wales due to knock-ons or other infringements, all caused by desperate Welsh defence.

Wales had put Italy under huge pressure in the opening 10 minutes and took the lead with a well struck penalty from Robyn Wilkins from 30 metres.

Led for the first time in the Six Nations by No 8 Siwan Lillicrap, Wales played with the wind in the first half, but despite that advantage found themselves under mounting pressure as the half wore on. It took some incredible defence to keep the Italians at bay and the visitors finally took the lead with a try in the 33rd minute.

It went to hooker Melissa Bettoni, who had earlier had a score ruled out for obstruction. There was no conversion and Wales hit back almost immediately.

A great raid up the narrow side of a ruck in the Italian 22 led to Hannah Jones, back into the squad after a stint playing sevens in Australia, carried long and hard to reach the line. Wilkins’ near touchline conversion gave Wales a 10-5 interval lead.

Italy went straight back onto the attack in the second half and the introduction of lock Sara Tounesi gave them a new running threat. She carried for more than 50 metres, while Giada Franco – who had a terrific game - managed 91 metres as well as 17 tackles in another starring role.

The lead finally went to the Italians in the 54th minute. A brilliant break by their scrum half Sara Barattin from the base of a ruck on the 22 saw her race to within a metre of the line, where she was cut down by Jazz Joyce.

The ball was recycled and wing Maria Magatti was on hand to pick up and dive over. The try was converted by Michela Sillari, who also improved a third try on the hour mark from the other wing, Sophia Stefan.

That put Wales two scores behind, but they managed to work their way into the Italian 22 and conjure up a front of the line-out peel try for hooker Kelsey Jones. They threw everything at the visitors in the closing five minutes, but crucially lost a line-out 10 metres out after kicking a penalty into the corner.