Italy picked up their first points of the season winning a tight game 22-15 under the roof at the Principality Stadium. The official attendance figure was 11,062 for the first of a double-header - but a considerable margin a UK record for the Six Nations. 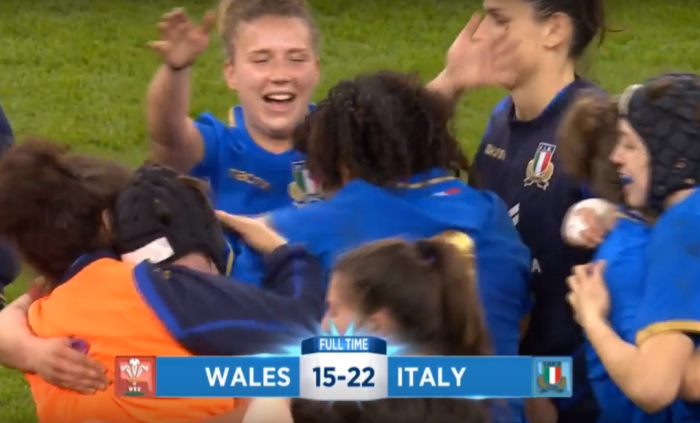 With early start and the roof closed at the Principality Stadium (the first “indoor” women’s test), Wales hosted Italy on Sunday morning in Cardiff.

Wales began with most of the possession, but Italy looked more dangerous when they had the ball, and after nine minutes got the first try. A short period of pressure near the Welsh line gave them an overlap on the right, with Isabella Locatelli finding the space to score. With the conversion they lead by 7-0.

Despite continuing to have most of the possession the first half was more than halfway through before Wales managed to spend significant time in the Italian 22. Errors prevented a maul from getting on the board, but after half an hour Robyn Wilkins was on hand to slot a simple penalty.

But they were not to take lead into the break. An Italian scrum over on the right touchline resulted in a wonderful passing move by Italy, taking the ball rapidly across the field with win Marua Magatti on hand to score. Italy went into the break with a narrow 12-8 lead.

The second half opened with a third Italian try, with Veronica Madia slicing through the Italian line, but tackled 3m short. But the ball was rapidly recycled left to find Beatrice Rigoni who scored in the corner. 17-8. To make matters worse Wales were soon down to 14 players when Mel Clay was sent to the bin.

Wales still dominated possession but suffered a second yellow when Butchers was penalised for an illegal tackle. But with Clay back on, they pulled back to within two points thanks to a quickly taken 5m penalty, leading to a try from Harries in the corner – and an excellent conversion by Wilkins.

Wales could now have taken the game, but the football skills of Magatti kicking ahead down the touchline put Italy back on the Welsh 5m – and with Harries isolated also lead to a third yellow card against for Harries holding on. With just a couple of minutes to go Italy kept the pressure on the Welsh line, engineering a huge overlap with Michela Sillari adding a fourth bonus point score for Italy.