​Japan swept Hong Kong to win the regional championship and claim an early edge in the Women’s Rugby World Cup stakes with both teams set to compete next month in Ireland. 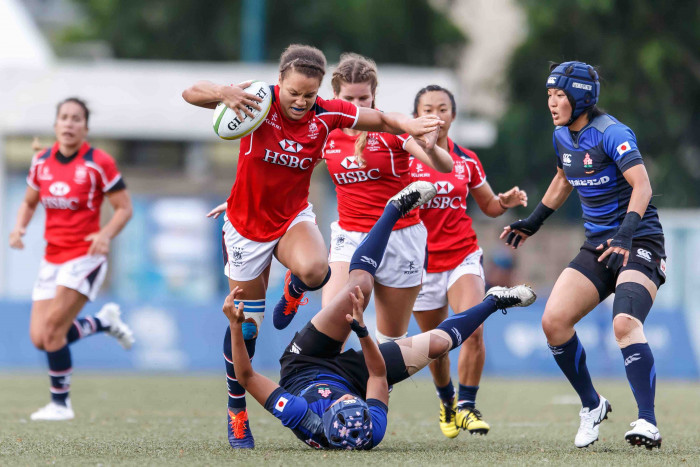 Hong Kong coach Jo Hull was left disappointed after the tie, but saw glimmers of progress from her side’s performance.

“It was another disappointing result, and obviously we aren’t happy with that, but there was some positives compared to last week’s loss in Japan.

“Our defence was good for parts of the game, as was our commitment and physicality in the contact area. Our performance at the breakdown was good and I think we improved in the set piece and were carrying the ball a bit better than last week.

“At times we were building good momentum in our attack, but there were some real individual errors that cost us quite dearly.

“We are disappointed, but at the same time we needed that game, because the next time we play it will be against Canada at the World Cup,” said Hull.

Hong Kong are pooled with Canada, runners-up at the last World Cup, as well as four-time champions New Zealand and Wales next month.

Hong Kong again allowed Japan a quick start with the visitors racking up 24 points in the first 30 minutes, with one-on-one tackling a problem area for the hosts early on.  Outside of the one-on-one contests, Hong Kong were much improved at the breakdown, but struggled to gel on attack in the opening stages with the interchange between scrumhalf Ho Mak-yee and fly-half Rose Hopewell-Fong an issue early on.

Captain Chow Mei-nam put Hong Kong on the board in the 30th minute, finishing off a solid patch of play by crashing over the line from second phase ball, after Hong Kong won an attacking line-out on Japan’s five-metres.  Winger Aggie Poon Pak-yan added the difficult conversion from along the right touchline to bring the score to 24-7.

But Hong Kong failed to hold the line over the last ten minutes, allowing a momentum-sapping try shortly before half-time to push the score to 31-7.

Hong Kong came flying out of the blocs in the second half as experienced scrumhalf Sham Wai-sum came on to good effect, helping to inject some fluidity into the attack.

Winger Chong Ka-yan capped that early momentum by opening up the Japanese defence in the 42nd minute to bring the score to 31-14 after Hopewell-Fong’s conversion.

But Japan had more than enough in reply; scoring two tries over the next ten minutes to widen the lead to 38-14.

In the 56th minute, Japan’s No.8 Maki Takano was shown a yellow card for repeated infringement and the veteran Sham capitalized quickly on the extra space, darting over for a try in the right corner in the 58th minute.  Poon missed the conversion from the touchline, leaving Hong Kong trailing 38-19.

Japan came back to score three more tries in the final quarter to extend their margin to 60-19 and claim a second straight Asian title.