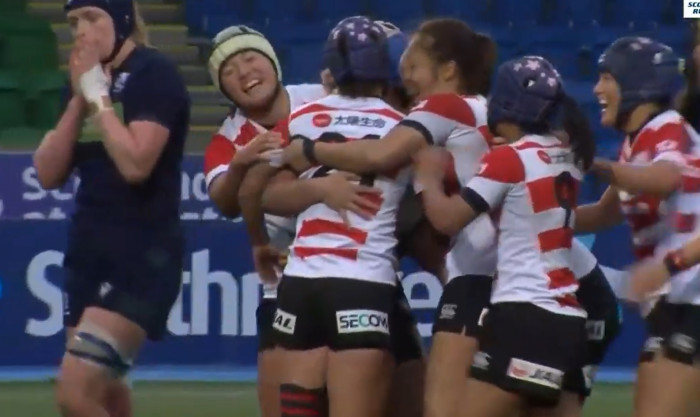 Japan selected an almost unchanged team for their first ever test match against Scotland, with only one changed to the starting line-up from the week before in Italy, Ayumu Suzaki coming in at outside centre.

Scotland coach Philip Doyle, on the other hand, made seven changes to his starting side from the previous game against Wales, as well as including two uncapped players on the bench.

Captain Rachel Malcolm moved to hooker from flanker, following recent injuries to the front-row, and was joined by prop Lisa Cockburn Rachel McLachlan as flanker. Jenny Maxwell started at scrum-half with Helen Nelson moving to stand-off. Lisa Thomson moved to inside-centre with Hannah Smith returning to the squad to start at outside-centre.

It was a reshuffle that attracted immediate success, with Maxwell and Smith being key parts of a move that ended with Megan Gaffney going over in the corner after just three minutes.

But Japan struck back immediately, with the speed of passing by the Japanese backs - as was seen against Italy – being decisive, Noriko Taniguchi scoring by the touchline.

Straight from restart Japan scored again. Fast hands, great running and a second try in the corner. Japan now lead 10-5 after seven minutes, with Scotland conceding two tries in as many minutes, barely touching the ball.

The speed of the Japanese recycling from their rucks caused constant problems for Scotland, with Japan repeatedly finding gaps in the Scots line, but the Scots defence held and on the halfhour Scotland pulled level after a rolling maul, Lisa Cockburn getting the score. Helen Nelson hit the post with the conversion attempt. 10-10 was the score, and so it remained at half-time.

Both teams had opportunities to score in the first quarter-hour of the second half, but it was Scotland who finally broke the deadlock with a well-worked move that ended with a second try for Gaffney. Five minutes later a second try from a Scots maul, this time touched down by Rachel Malcolm, put Scotland 10 points clear.

At this point Scotland seemed to have the game under control with the last 20 minutes to go, but the tiring Japanese were revitalised by a series of replacements and the tide of the game began to turn. With ten minutes to go Ayumu Kokaji scored at the foot of the posts. With the conversion Japan were now within three points of the Scots. 20-17.

With three minutes to go Scotland still lead, with the ball down on the Japanese 22, but the visitors returned to the fast rucks and gradually worked up the field. With two minutes to go Japan’s Maoto Ebuchi was tackled but not held three times, gaining 15m and throwing Scotland back into their own half, and gaining a penalty. With Scotland back-peddling rapidly the penalty was quickly taken. With a now disordered defence the ball was worked wide, and Japan were now inside the Scots 22. Quick hands from another ruck took the ball to Ayasa Otsuka who seized on the gap in front of her to run around under the posts. Japan were in the lead 20-24, with just a restart to survive, which they did without problem.

Japan therefore had not only beat Scotland, but completed a short European tour unbeaten. Assuming they qualify for the World Cup they will be a much greater threat than they were in 2017.