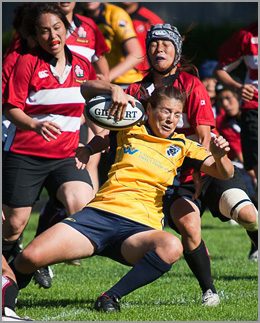 The Japan womens rugby side have returned from their mini-tour of Canada which was designed to help them prepare for Novembers Asian World Cup Qualifiers.

The winner of Japan versus Singapore and Hong Kong versus Kazakhstan in November will play for the lone qualifying position for the 2010 Womens World Cup. The 11 teams already qualified are England, New Zealand, France, South Africa, Canada, USA, Ireland, Wales, Sweden, Scotland and Australia.

Japan played two games in Canada, the first a match against Burnaby Lake which they lost by a single point 25-24 though their second game was a tougher affair as they went down to a star-studded BC Presidents XV 38-0. (action from the game pictured right)

Against Burnaby Lake the game went down to the wire after the home side scored in the last minute and international Anna Schnell made good on a conversion to take the game 25-24. In an exciting game, the lead changed hands three times in the final 10 minutes and it set Japan up for the tougher affair against the BC President's side which starred a number of international players.

Almost all of BCs six tries were scored by members of Canadas National Senior Womens Team, but the provincial side was brimming with talent selected by the British Columbia Rugby Union. Both teams came started strongly, but it was just 15 minutes before BC put up their first try of the game with international veteran Maria Gallos first touch of the ball.

Japan had tidied up some aspects of their game since their Wednesday match against Burnaby, but BCs defence held strong for the entire 80 minutes and the visitor's only clear opportunity for points was lost when an easy 15m penalty in front of the posts went wayward.

Andrea Burk, who made her first appearance for Canada this summer in Denver at the Can-Am camp, impressed across the board with her tackling, strong running and prodigal boot. She ended up with 11 points for her efforts, using her foot from the backfield often as an option to relieve BC of Japans pressure.

As was seen against Burnaby, Japans set piece and work around the breakdown was solid. Japans backs threatened out wide several times, but were shut down some solid BC defending.

Japans head coach Mitsutake Hagimoto said the speed of the BC Presidents XV was hard to match, and likened them to Kazakhstan.

Todays match was very good, and very fast. We knew this team would be a harder game. They reminded us of Kazakhstan. We are disappointed we lost, but it was a good experience for our girls and we look forward to Singapore.