Japan in form for World Cup

Japan overwhelmed Hong Kong in the first leg of the Asian Championship, continuing the form they showed in Ireland and Wales last month. 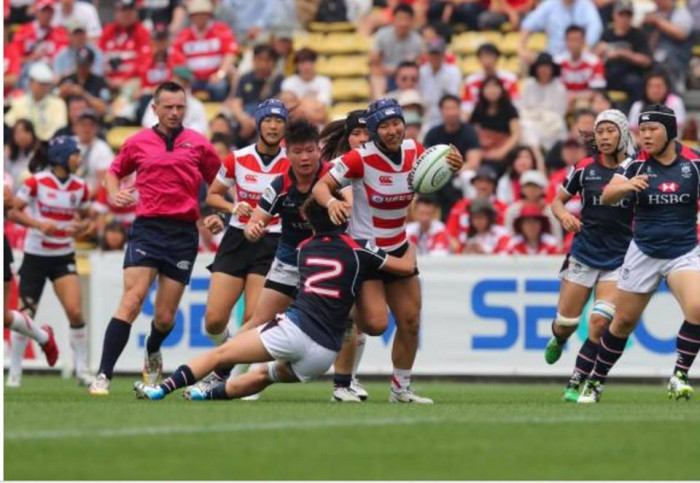 Japan have been on great form in the run-up to the World Cup, with two narrow defeats in Ireland ans a big win over (an admittedly young) Wales last month. In this fixture they had won 14 out of the 15 previous games, so began as clear favourites, and more than lived up to that. From the outset, the "Sakura" dominated the set piece and contact area in a clinical performance that caused real problems for Hong Kong coach Jo Hull’s squad. Japan jumped out to a 22-0 lead, and claimed the bonus point for scoring four tries, in the opening 25 minutes.

It took only five minutes for winger Riho Kurogi to score the opening try and Japan had the bonus point in the bag by the time the clock hit 24 minutes after further tries from winger Enko Hirano, hooker and captain Seina Saito and number eight Sayaka Suzuki.

Saito touched down her second try on the stroke of half-time to send her side in with a 29-0 lead, but barely a minute after play resumed that had increased with Kurogi scoring her second try of the match.

Centres Iroha Nagata and Keiko Kato and winger Hirano crossed the try-line before the hour mark and it was left to Nagata to score the 10th and final try with 10 minutes to play in Odawara.

The Sakura went on to score 10 tries in total, five either side of half-time, but despite this Japan still see room for improvement.

“Our performance today is not good enough if we really want to aim to reach the top eight at the WRWC,” said Saito. “That’s all I can say about today’s game. We have a week to go to the next one in Hong Kong, so we will fix our problems and show the accuracy of play needed at the level of top eight in our next match in Hong Kong.”

This was the fifth time Japan have passed a half-century of points in the fixture. It was also the third largest win in any test match this year, and the second-largest defeat suffered by a World Cup qualified team. Its 15 years since an Asian team won a pool game in the World Cup. Japan - drawn with Australia, France and Ireland - are looking on form to bring that run to an end.

Hong Kong - drawn against Canada, New Zealand and Wales - will be more concerned, especially with this result coming on the back of heavy defeats on their tour to Spain.

“It was a disappointing performance obviously, but fair play to them, they came out hard and fast and dominated in all areas really,” said Hull. “We played some okay rugby in parts and forced them into some mistakes defensively, but we let ourselves down, particularly at the contact area, and our set piece is underperforming at the moment, which is hurting us,

We are bitterly disappointed, but no one is feeling sorry for themselves in that locker room. We know we had a bad day at the office. We need to learn from that and also put it behind us now, Collectively, we need to look inward, and ask ourselves what we are going to do as a team, as the entire squad including the girls at home, for next week. That is my challenge to the players the management, to everyone,”

For Hull, the side now has an important opportunity to test its mettle for the last time in a match environment ahead of the world cup next month.

“We have seven days before our next test, so we need to review and get back to work on what we need to get right. That will be a good preparation for us for the World Cup, where we are going to have to be able to contest back-to-back tough matches,” added Hull.

“We are a month out from our biggest ever challenge and the players are aware that today was an unacceptable performance when we are wearing the Hong Kong jersey, but it doesn’t change what we are doing, or our belief in ourselves, our training and what we are working on. This is another opportunity now for us to get better,” said Hull.

The teams will face off again in the championship decider next Saturday, July 15, at King’s Park, Hong Kong, before Hull names her Rugby World Cup squad.