Japan one to watch at World Cup

If their short tour of Ireland and Wales has shown us anything, it is that Japan will be more than just making up the numbers at August's World Cup in Ireland. They could be the shock team of the 2017 World Cup. 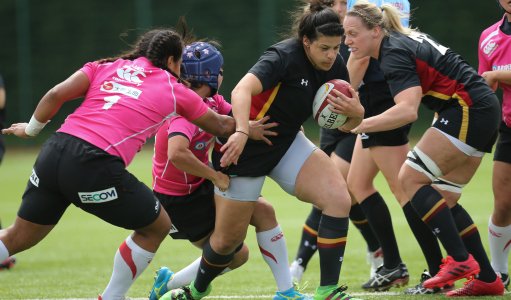 Any World Cup teams underestimating Asian Champions Japan will do so at their peril - that is the major lesson from Japan's visit to Ireland and Wales this month, Two narrow losses to an Ireland XV were followed by today's thumping 52-10 victory over an admittedly young Wales team in the only full test match of the tour, Welsh coach Rowland Phillips' using the opportunity of Japan's visit to experiment with some of his younger players.

This was the first time the two countries have met and the result was only the fifth Asian win over European opposition in test history. It was also by far the largest.

Jess Kavanagh-Williams crossed the line for the hosts' only points of the first half, which was balanced by four tries for the Japanese. Despite promising signs in Wales' attack, Japan then added another five tries in the second half, before Wales finished the game on a high through a try from driving-line out, with replacement Kelsey Jones touching down for the score.

The visitors made a strong start to the game and the early possession paid off as No 8 Mateitoga Bogidraumainadave - a real potential star of Ireland 2017 - powered over for her side's first try of the afternoon in a style familiar to anyone who has watched the Japanese in the past. Minori Yamamoto was off target with the conversion attempt, but her side quickly doubled their advantage, as a neat angle by Iroha Nagata sliced open the hosts' defence, allowing the centre to slide in for the score.

Wales replied immediately, however, as Kavanagh-Williams exploited space on the outside to run in from 30 metres, but the conversion attempt from out wide fell just short of the posts.

A Welsh infringement in midfield saw Japan's Mayu Shimizu convert a straightforward penalty to put her side eight points ahead.

Wales looked to bounce back immediately to narrow the visitors' lead once again, but despite a period of sustained Welsh attacks, and numerous penalties conceded, Japan managed to turn the ball over and relieve pressure. The visitors once again built up phases in the Welsh half and eventually created space for Akari Kato on the right to run in unopposed for her side's third try of the half.

As the game entered the final play of the first half, Japan were camped on the Welsh 5m line, and after numerous phases, the pressure told as the forwards forced their way over to take the score to 5-23 at half time.

Japan picked up where they left off in the second half, as Nagata and Kato both secured their second tries of the afternoon, within the first 10 minutes, to give their side a 30-point advantage.  An up-and-under kick from inside the Wales 22m was collected by the covering Japanese defence, who quickly shipped the ball out wide. Despite a scrappy pass as they neared the touchline, the ball still eventually found its way to Yui Shiozaki, who raced clear for her side's seventh try of the game, before prop Saki Minami added another with 15 minutes remaining on the clock.

Wales looked to finish the game on a high, and after Bogidraumainadave was sent to the sin-bin, replacement Jones powered over from the back of a driving line-out to make it 10-45.

However, Japan had the final say as Yuki Oyokawa snuk through for a try in the final play of the game.

Kazakhstan recorded 16 wins over European opposition between 1994 and 2002 before they were reclassified as an “Asian” team.