England men's team manager Martin Johnson offered his support to the country's national women's rugby team when he visited the squad at Surrey Sports Park in Guildford, the venue of the Women’s Rugby World Cup which starts next month. 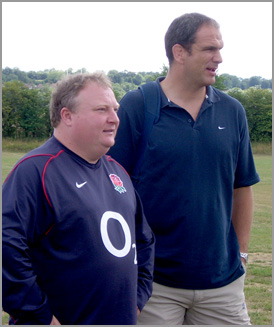 The former World Cup winning captain passed on his support ande advice to the 26-women squad as well as watched them in training at the tournament pool game venue.

Johnson said: Im really impressed with what I have seen. The players look in great shape and are clearly raring to go.

As a former player, a team manager and someone who has experienced a world cup before, I know what the squad are going through and what is still to come for them.

"There will be some very challenging times ahead but I am sure this squad will be the best prepared they can be to contest the world cup. I know that I and the rest of the England mens squad will be eagerly following their progress throughout the tournament.

The WRWC kicks off on August 20th. For WRWC 2010 tickets visit here

Rugby fans who buy tickets for WRWC 2010 will also be put on a priority ticketing information list for the 2015 Rugby World Cup in England.