With Kazakhstan set to play South Africa in a two test series this week in Dubai we spoke to Luke O’Callaghan who has spent many years working with the Kazakh rugby union. 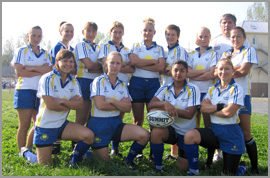 OCallaghan has been involved as a player, coach and development manager in rugby in Eastern Europe and Central Asia for the last ten years and has had a direct involved with the Kazakhstan womens team for many years in a variety of roles.

The Kazakhs are playing South Africa twice this week in Dubai after a chance meeting between OCallaghan and the SARU President, Oregan Hoskins at a recent IRB general assembly.

We spoke about how both of our womens teams struggle to get good matches and then we decided that we would get the teams together in Dubai. He went and made it happen and I think these will be very good World Cup preparation games for both teams.

OCallaghan says the one thing the Kazakhs will be is well prepared. Girls over here are playing full contact from a very young age and the team has an excellent coach in Valeriy Popov so they will go out there ready. This Kazakh side is ageing team but there are younger players coming through now over the past few seasons.

The Kazakh team will be at the World Cup after they came through the Asian qualifiers last year but the lack of international games against similarly strong European teams over the past few years means they face an uphill struggle at the competition in London.

Until 2002 Kazakhstan competed in FIRA competitions with other European teams but when FIRA became Europes regional confederation the Kazakhs found themselves moved to Asia and have been unable to develop regular fixtures with the rest of Asia.

Funding is a problem and after many years of success in Asia, other teams are now catching up with us. That was evident when we failed to qualify for the Rugby World Cup 7s and that was a big shock for everyone. But in saying that, there are lots of girls playing here and it is now very acceptable for women to play rugby in Kazakhstan because the team have done so well internationally. Since Kazakhstan became an independent country they are still new on the sporting front as a nation and with the womens team being very dominant in Asia they are a well known side.

The Kazakhs favour a physical game and they are likely to get that against South Africa this week, a team who have been improving every year.

We beat South Africa at the last World Cup but since then they have really improved and being at the Nations Cup was a big deal for them. Kazakhstan when it comes to womens rugby are in an interesting place because they are a big strong team but they mostly face Asian teams who are very quick and talented but arent as big physically. It means they have had to become more balanced around the pitch.

It will be a busy few months for the Kazakhs who are preparing for a World Cup where they will face the USA, Ireland and host nation England. It's a tough pool where they face a battle to win any of their games.

Kazakhstan will also be paying very close attention to how England run the tournament as they could well the hosts in four years time having submitted their application last year. That decision will be made this summer and if they do win the bid, it would bring the Women's World Cup to Asia for the first time.

O'Callaghan said: "Hosting the World Cup would be great for the game in Kazakhstan and the stadiums and facilities exist to do it. It would also be a big boost for the 15 aside women's game in Asia as a lot of the countries, like Thailand for example, are really looking more at the 7 aside game now. Watching what the IRB do about that is going to be very interesting."

Kazakhstan play South Africa on April 8 and 10 in Dubai.

Luke O'Callaghan is an Irishman who has been involved as a player, coach and development manager in rugby in Eastern Europe and Central Asia for the last ten years. He speaks fluent Russian and has played for the Kazakhstan national team 8 times, the subject of the 2007 documentary, Rugby Nomad (http://www.youtube.com/watch?v=7Dho3ZOOBeg). He is currently completing an MSc in Sport and Exercise Management at UCD, Ireland and his disertation will focus on women's rugby sevens. He works as a consultant with several national governing bodies for rugby in Asia and Europe. Read more on http://rugbynomad.blogspot.com/"