Four years almost to the day since they last met, Kenya and Uganda revived their Elgon Cup rivalry in Kisumu, Kenya. The last time the sides had met a single point decided the game in Kenya's favour. Today's game was rather more one sided. 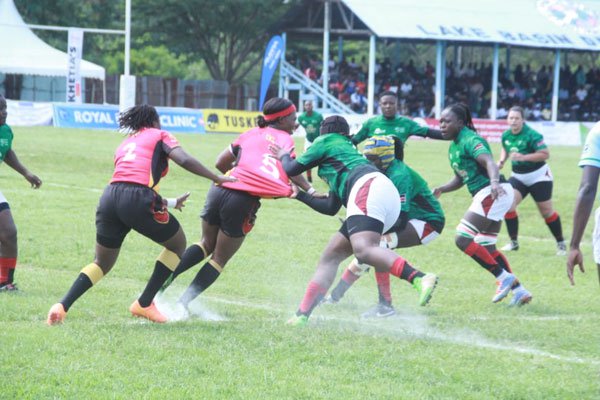 Skipper Philadelphia Olando landed a hat-trick of tries as Kenya Lionesses whipped Uganda's Cranes 42-13 in the first leg of the 2019 Elgon Cup at Mamboleo Showgrounds in Kisumu on Saturday.

The match, the first of a double-header with the men's game following, was revived following the creation of the Africa Cup, to be played in August.

Neither side had played any test rugby since 2015, when World Rugby's decision to bar the two nations from the qualification process for the 2017 World Cup resulted in the abandonment of the fixture and a concentration on the sevens format. World Rugby's change of policy for the 2021 World Cup, which will now have a competitive African qualifier, directly resulted in this weekend's revival of a fixture that goes backk to 2005

After so long away there was a nervy start, Uganda almost took the lead on six minutes when a Kenyan Lioness player dropped the ball inside her 22, but the hosts recovered in time to clear the danger.

Uganda were reduced to 14 moments later and Kenya capitalised on the advantage to take a 5-0 lead on the 17th minute through Grace Adhiambo. Irene Atieno missed the conversion.

Olando sent the home supporters into wild celebrations four minutes later when she broke near the try area to cross the line easily, Atieno redeeming herself with a successful conversion to stretch the lead to 12-0. Olando grabbed a brace on 25 minutes after a beautiful exchange on the left flank.

The visitors attempted to respond but the host's defence stood tall. On the the 35th and 39th minutes, Celestine Osinde and Janet Okello landed two other tries to give the Lioness a comfortable 27-0 lead at the break.

In the second-half, Lioness continued to dominate the duel, their efforts paying off immediately when Olando capitalised on a defensive lapse to score, her compatriot Sophia Ayieta adding another in the 58th minute.

Charlotte Mudoola got Uganda into the score-sheet through a penalty on 63 minutes, but Stella Wafula scored 10 minutes later to dampen their hopes of a comeback. The Cranes scored their two unconverted tries in the 68th and 76th minutes through Mudola and Winnie Atiang respectively.

The second leg will be played in Kampala on 13th July.