As Netherlands prepare to host the final leg of the Women's Sevens World Series next week, we caught up with star player Lorraine Laros. 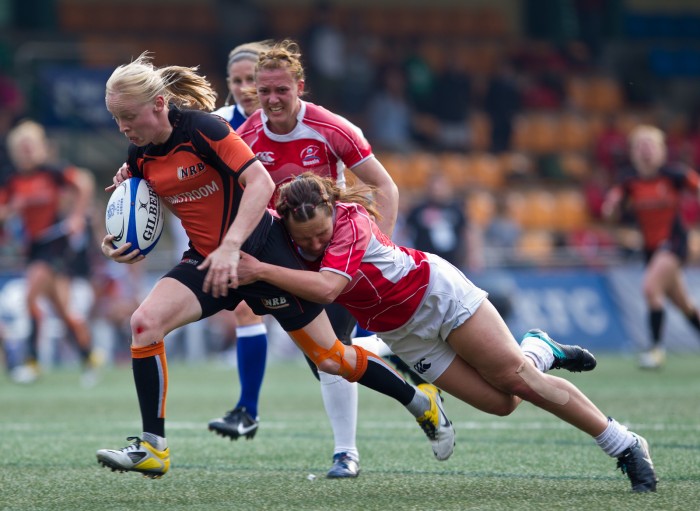 Hosting the World Series marks yet another milestone for the Netherlands Rugby Board for a country with a rich history in the women's game.  The Dutch Women’s 15’s team played against France in the first ever women's rugby test match in 1982. In 1998 the city of Amsterdam hosted the first official IRB Women’s 15’s Rugby World Cup and fast forward to 2011, where current Dutch Sevens squad member Kelly van Harskamp picking up the IRB Women’s Sevens player of the year award.

Laros has been a key player in the Netherlands side this past year and she tells us how preparations are shaping up.

You are in a tough pool in Amsterdam next weekend- tell us what you expect from each of the three teams?
We are in the pool with New Zealand, Russia and China. We have played them in previous WSWS tournaments, so we know how they play. We expect them to use their size, so we must make our tackles and hope our home town support can see us score tries. The beauty of Sevens is a game can go by the bounce of the ball and we are looking forward to finishing the World Series off strongly.

How important is it for exposure of the game in your country to be hosting a leg of the series?
It's great that the World Series is coming to Amsterdam! The sport is growing in the Netherlands. It is a good time for us to show our country that we are playing at the highest level on the international stage! It’s great for our family and friends to not have to watch our matches via the live stream, but are able watch it live and cheer for us!

Would you deem your results and performances on the series a success in this first season?
I think we are satisfied with the debut World Series season. It's been a year with ups and downs for us but we also have any eye on peaking in time for the Sevens RWC in Moscow. The best is yet to come!

What areas do you need to improve on ahead of the World Cup in Moscow?
I think we are on the right track in improving our play, but we need to work on our consistency and tightening up our defense.

What are your targets/performance goals in Amsterdam?
Keep improving as a team, stay together and just have fun playing the game.

Watch the Amsterdam promo video here The IRB WSWS is held in conjunction with the Amsterdam 7’s rugby tournament and for more event information and to purchase tickets, please click on http://www.amsterdamsevens.com/Start