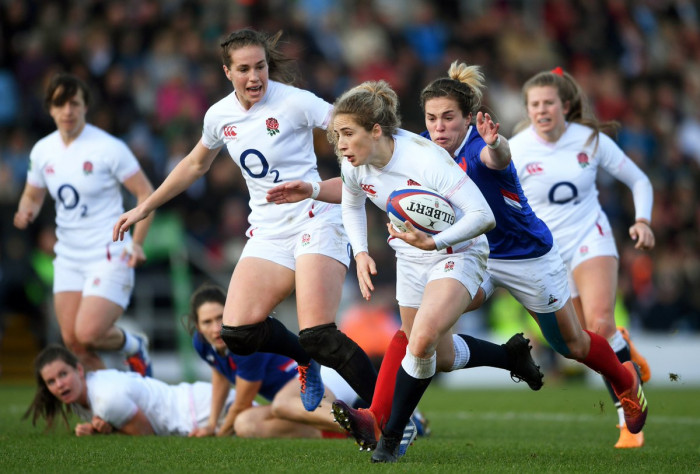 A last ditch score for England saw them defeat France for the second time in a week in front of an excellent crowd at Exeter.

France looked strong in the opening exchanges and came close to scoring in the initial 10 minutes, but Abby Dow eventually managed to save the English team, running from behind her line to the 22 after a turnover penalty. Similar misfortune then occurred for the England side with Enily Scarratt dropping the ball over the line for knock-on in the 16th minute,handing possession back to France.

Points eventually came with England playing the woman in the air allowing Jessy Tremouliere a penalty. Laure Sansus then helped France push the lead further when she latched onto her own kick to score.

England stepped up their game for the remainder of the first half spending it almost exclusively in France’s half of the pitch, but not making it count, giving several penalties away to France. England did get chance in the 30th minute when France give a penalty for not releasing. However, Scarratt’s kick went The England centre made amends though with two further penalites before the break as France turned around 8-6 ahead.

The Red Roses managed to take the lead early in the second half with a third successful penalty for Scarratt and then another France offside gives Scarratt her fifth penalty and a 12-8 lead. A couple of excellent scrums regathered France though and with the ball moved fast out to Caroline Boujard they are over the line and a conversion from Tremouliere put France back in the lead by three points.

An action filled last ten minutes saw a yellow card for both teams in separate incidents with Zoe Aldcroft and Menager both watching the final minutes from the sin bin. With two minutes left and a mistimed kick from Morgane Peyronnet found Natasha Hunt who passed across the pitch to Scarratt and then Lydia Thompson for the try on the wing for a dramatic winner.