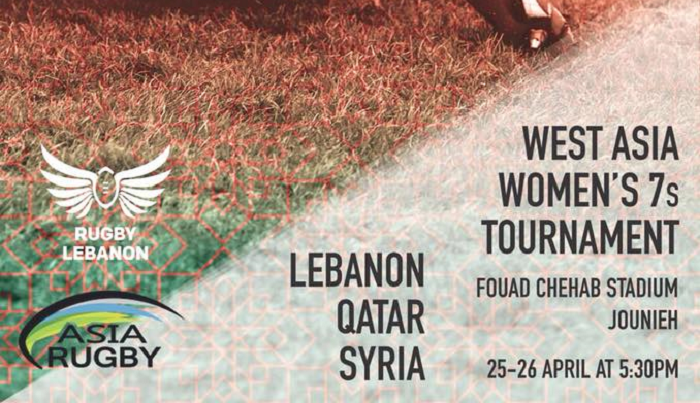 How did this tournament (involving Syria and Qatar) come about?

The tournament was developed to coincide with the Asia Rugby Championship Division III West tournament that is being held in Jounieh, just north of Beirut between the 23rd to 28th April between men's 15s teams from Lebanon, Qatar, Iran and Jordan.

The Women's 7s tournament will consist of two teams from Lebanon, one from Qatar and one from Syria. Lebanon, Qatar and Syria, as many of the other Federations in the Middle East have fledgling Women's rugby programs, so we decided to incorporate the West Asia Women's 7s tournament into the men's 15s Schedule in order to give our Women's team the opportunity to participate internationally and utilise the exposure of the tournament to encourage more women to get involved in rugby.

How well known is rugby in Lebanon? How is the game perceived?

Rugby is a growing sport in Lebanon but is well behind the two largest sports of basketball and football in terms of exposure.

We are still very much a developing sport and many people are still unaware of rugby's presence in the country yet with the recent participation of a Lebanese Rugby League side in the Rugby League World Cup held in Australia in October 2017 and the tireless work we have been doing on the ground here in Lebanon to develop rugby union at a grassroots level we are starting to see the benefits in terms of growing numbers and participation rates.

The game is often perceived as a violent sport but we have been working hard to change the image to reflect rugby's core values of solidarity, sportsmanship etc.

When (and where) did women's rugby begin in Lebanon?

Women's rugby began to develop in 2012, when the LRUF Director of Rugby and National coach, Steve Wrigglesworth, was able to successfully organise and host a Women's Scouts touch rugby gala day involving more than 500 young women. Within the same year a Lebanese Women's Rugby team was organised and a game played against a visiting Egyptian team. Unfortunately due to a severe shortage of available coaches and administrators on the ground in Lebanon Women's rugby suffered a decline until 2016 when a Lebanese women's rugby team played in the Dubai 7s. In the last year regular women's domestic matches have been played and a standalone women's 7s competition is planned later in the year.

We currently have approximately 70 Women's senior players aged between 18-25. The majority of those players play in two clubs, The Blue Stars and AUB. They are all Lebanese yet we do have one or two expats that play domestically.

Lebanon has a significant Rugby League tradition. Does this affect the development of women's rugby union?

The Lebanese Rugby Union Federation is working hard to build an sustainable and competitive pathway for our young women so that they can focus on Rugby Union, particularly as the opportunities to play at an international level far exceed those of Rugby League.

What challenges does women's rugby in the Lebanon face (financial, cultural, competition from other sports, etc.)

The challenges here are many and they are not necessarily restricted to the women's version of the game. The first and most important challenge we face is a lack of rugby playing infrastructure and facilities. Many of the grass pitches are being converted to 3G by the football federation and as such we struggle to find adequate playing facilities.

Secondly, culturally rugby is perceived to be a very violent game and thus many parents are reluctant to allow their young women to play. Those women who do play are often seen as being man-ish, as Lebanese women are meant to be very feminine and dainty.

We have certain level of competition with Rugby League that affects our ability to maintain a strong player base but as I discussed above we are trying to demonstrate to our young women that the pathways, especially in international rugby are more appealing.

What are the ambitions/plan for the development of Lebanese women's rugby? Is there interest in eventually forming a 15s team?

We are currently focused upon 7s development particularly as there are more opportunities for our young women in the 7s version of the game. We are building a 7s squad with an eye to hosting the Arab Rugby 7s in Beirut in October and then possibly joining the Asia Developmental Series and Asia 7s Series in 2019.

We do have plans for the development of a Women's 15s competition and national team but the highest priority at the moment is 7s domestic and international development.

Can you tell us anything about your opponents, and the state of women's rugby in your wider region?

Qatar's women's team is predominately made up of expatriate Europeans and some Middle Eastern girls. Syria's team is all Syrian and as far as I am aware they have only been developing their women's team for a short period of time.

Can you tell us anything about one or two of your players, and your coaching team?

Our coach Amady Diallo, is a former Senegalese National 7s and 15s player and he has also been the coach of the Sengalese women's 7s team. He is in Lebanon for the next year or two and has been appointed the national 7s coach for both the men's and the women's teams.

Our team captain is Zina Ibrahim. Zina is a very independent and determined young woman who also assists in coordinating with our young women. Zina is also very tenacious and on the field has an extremely high work rate.