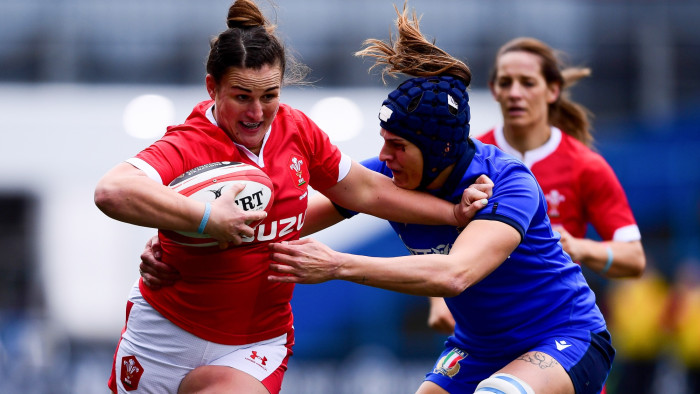 The 34-year-old spoke emotionally about the journey she had been on from struggling to find a team as a teenager to now leading her country’s majority-professional side.

Lillicrap has been joined by the likes of star winger Jasmine Joyce, who played full-time as part of the Great Britain sevens team last year, with the players taking their place at the National Centre of Excellence in the Vale of Glamorgan.

“That is the reality, I didn’t have a club to play for because there was no age grade,” Lillicrap said in tears.

“I fought for so long to get my first Welsh cap and to be in this privileged position now and the strides that the game has taken is massive.

“It is a dream job to be able to have this opportunity to be a professional rugby player in Wales and to be the best player we can be for that red jersey is just huge and it is going to be life-changing for myself to be able to concentrate on being the best player I can be ahead of the World Cup.”

The forward has left her role as Swansea University’s head of rugby, with the likes of Natalia John and Ffion Lewis leaving their jobs as teachers, with Lewis taking a sabbatical.

The 12 players have been offered a one-year contract in the run-up to October’s Rugby World Cup in New Zealand and the confirmation of a number of retainer contracts is also set to be announced in the near future, with those players training twice a week.

The full-time professionals will train four days a week within the Welsh national set-up, a departure from England’s professional programme which was launched in 2019 and sees players train full-time with their Allianz Premier 15s clubs.

Lillicrap said: “The main thing for us as players is the journey is just beginning, we’ve got this opportunity - it is now how we change that story over the next 12 months.

“It is going to be life-changing for me but also we’ve got the chance to change the face of Welsh women’s rugby and change the narrative and story and that is even bigger than any of us personally.”

Commenting on the announcement, WRU Performance Director Nigel Walker laid out his ambitions for the programme to be world-leading.

He said: “This is just the start and I said a few months ago that I wanted to build the best women's programme in the world and that's still the ambition.

“We know that we need a number of professional full-time athletes, full-time players in that squad, and that will be the ambition.

“I'm not saying money is no object, but we are going to produce the best programme for our women players that we can.”

The 12 players will now begin their preparations, alongside the wider squad, for the 2022 Women’s Six Nations which begins in April.