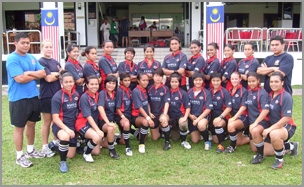 Malaysia will field at international level for the first time this weekend when they take on Singapore in a one-off test game. Head coach Raimi Yusuf says they are expecting a tough first test from their international neighbours.

While womens rugby in Malaysia is still in its infancy there is currently just one competitive club though a first rugby league is planned for 2010 the pedigree of players available to Yusuf is impressive.

The club from which most of the players come from is The RSC Dingoes which is based in Kuala Lumpur and the payers are experienced athletes with a handful also representing Malaysia in football. Others are competitive in touch rugby, boxing and weightlifting. Were proud to say that in such a short time since the team was formed, RSC Dingoes have managed to play visiting teams from Hong Kong and the National Laos Team, Yusuf said.

The RSC side also played a part in the Singapore womens rugby league earlier this year so they will know plenty about their opponents this weekend. Planning for the game has focused mainly on three areas he added.These are fitness, strength and team skills,

For this test match we regularly train three times a week to make sure that the team is prepared physically and mentally. Singapore is an experienced side with players with speed and mobility so I expect them to be playing a real running game in the backline. They know from our game in various tournaments that the Malaysian girls are a strong side in the forward pack so they may try and keep the ball away from our forwards.

Having competed as a Malaysian Barbarians team last week against Singapore A, Yusuf adds that playing at full test level will be a major progress step.

Its a great opportunity for Malaysian ladies rugby to grow. If we have a good foundation at the beginning. the chances of Malaysia ladies rugby to explode is great. It will take a lot of patience but most importantly our union or the sports council here must recognise the potential of growth and help us. It is mountain to climb but we have to start somewhere.

The plan in Malaysia is to develop a fulltime league for the game from 2010 with a three-year programme setting out the aims to develop the game in the country. For the first three years we are concentrating on a few objectives for the national side. They are: to create a bigger pool of players, to introduce the sport to the general public and to have as much exposure in games and tournaments as possible. With this as a guiding path, we hope to be a force in the Southeast Asia womens rugby.