Malaysia have won promotion to Asia’s Top 8 – and with it a chance to compete for a place at Tokyo 2020. 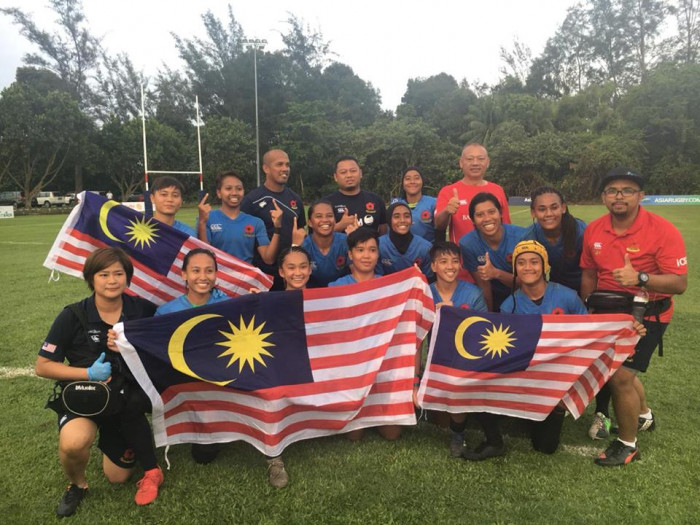 Malaysia have emerged as winners of a closely contested Asian Trophy, played at the Pangan Club in Seria, Brunei.

Ten teams took part with at least half of them beginning with realistic chances of lifting the trophy in a tournament where no team were clear favourites at the start, and no team ended unbeaten.

Ada Milby, Asia Rugby Exco member & World Rugby Council Member and coach of Philippines expressed the importance of this tournament to all the teams at the start, saying that a win would mean “for a seat in the top 8. It means we get to play in more tournaments and have those opportunities to get better. It’s a very important weekend and we would like to win it because we would like to show Asia that we belong in the top 8”

The pool stages saw the Philippines as the only team with a 100% record, The “Lady Volcanoes” impressing with a 12-5 win over Uzbekistan, a 17-12 win over India and a 31-0 win over Pakistan, an ending with a 43-0 win over Nepal to end the pool stage at the start of the second day.

Uzbekistan were runners-up in the pool, but to show how tight the tournament could be they only achieved that semi-final spot thanks to the inexperience of Nepal, who were on the Uzbek line, leading 7-5, when the final buzzer went – but then lost possession going for a glorious second try, allowing Ayzada Yusupova to sprint the length of the field to score the winning try.

It was a win that also ensured India would miss out on the semi-finals, though they did win their clash with rivals Pakistan 43-0, and went on to with the Plate on the second day.

Pool A was even closer with three teams – Malaysia, Guam and Laos - tying for top spot with three wins and a loss after Guam beat Malaysia 17-12, but then lost to Laos 12-10. In the end it came own to point difference, Malaysia’s 22-0 win over Laos being a major factor ending Laotian hopes of a surprise spot in the last four.

Hosts Brunei made their international sevens debut in this pool – the fifth country to do so this year – and predictably found it tough going but were awarded their first try – a penalty try - at the end of their second game with Indonesia. However on the second day Nicole Jones became the first Brunei player to be credited with a try in an exciting ninth place game with Pakistan, which Pakistan won in the final seconds 15-10, Rimsha Khan getting the decisive score.

After the first day, the semi-finals were predictably extremely close. First Malaysia seemed at complete deadlock with Uzbekistan until Izzah Azizan finally scored the games only try with barely 40 seconds to go, Malaysia winning 5-0.

Guam and the Philippines seemed similarly locked together for much of their game. Guam had a slender 7-5 lead at the break and seemed to have survived a yellow card, awarded at the end of the first half, unscathed until Aldee Denuyo scored the decisive try for the Philippines, who then hung on to take the game 10-7.

The final was just as close with a Nurul Azreen Azli try for Malaysia being cancelled out by Rassiel Sales for the Philippines after a long, long final play of the first half, before Malaysia scored the only try of the second to win the tournament 10-7.