We caught up with England's Sarah McKenna, and talked about the winning culture at Saracens, her standout season and why not being offered another 7s contract was a blessing. 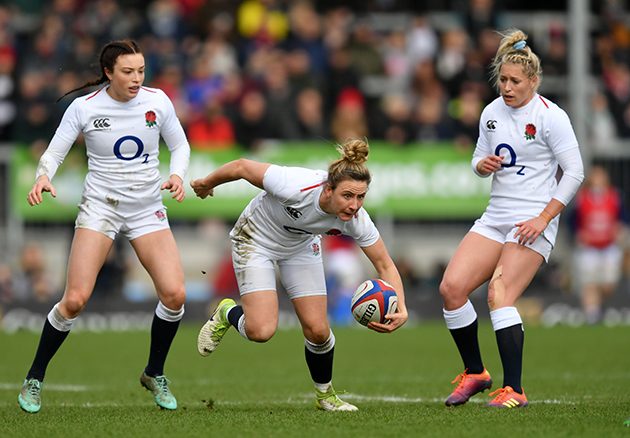 ‘Breakthrough season’ is a term typically reserved to describe new players grabbing their chances early in their career.

But for England this year that accolade undoubtedly went to 30-year old fullback, Sarah McKenna.

The Saracens star has been around England teams for years, though has been better known for her exploits in the 7s shirt having been a contracted player and a regular on the World Series.

But the end of her time in coinciding with the retirement of Nolli Waterman, has given her the perfect opportunity for a long stint in the England 15 shirt, and she has grabbed the chance with both hands.

For her part, McKenna puts her stellar past season down to the fact that she is focusing on one discipline fully and getting much more game time.

“When I was playing 7s, I was just dipping in and out of 15s game so for a lot of my 20s I just wasn't getting enough game time to be able to try and have that impact when I did come back in both for club and country.

“I wouldn't change my time in 7s - it was amazing getting to travel the word and have such great experiences, but towards the end, getting picked less and less meant I was getting less pitch time and on a World 7s Series if you're not getting much game time well you’re just not playing much rugby at all.”

McKenna, who had competed for years with Waterman for the England 15 shirt, was disappointed not to have her 7s contract renewed but in the end she is grateful that it provided an enforced change of direction.

“I think it was probably a blessing and in hindsight I am thankful for that. I would have had an Olympics at the back of my mind and so to have that decision taken away from me meant I could just think about and focus on 15s.

“Once I got into the right place, it was really exciting to come back properly to Saracens who were doing so well. They had moved on a lot since I had been fully involved last and were progressing everywhere and I was really excited to be part of that. I had been watching some of the Tyrrells Premier 15s games and wincing at how physical it had become but I couldn't wait to throw myself back into it.”

McKenna, who has been outstanding for club and country this season, was recently shortlisted for England’s player of the year and believes 7s has added to her game significantly.

“I think it has helped me a lot particularly in areas like tactical awareness, knowledge of space and that sort of thing. James Bailey was an expert in those areas so I was lucky to have learned a lot from him as a coach.”

Now on a fulltime 15s contract, her 7s experience has also prepared her well for life as a fulltime athlete and she has good advice for those starting out.

“The key issue is time management and it can be hard for people to settle into that. I know now for example when there is rest scheduled that you absolutely have to take that and on days where there doesn't seem to be a lot going on, you’ve got to do something else that will benefit you and not just sit around. It might be something simple like stretching or getting involved in coaching or just really getting away from rugby altogether.

“Personally I am doing more and more coaching with St Alban’s women and I am loving that.”

Saracens have benefited enormously from the supportive way the overall club has worked with its women’s programme – seeing it has an integral part of the set up and not some sort of optional add-on.

The club’s men’s and women’s players use the same facilities and McKenna and her teammates are also regulars at Mark McCall’s team’s video sessions, where players review weekend matches and offer brutally honest feedback.

She adds that her team has benefitted from the winning culture that is permeating every side which wears the black and red shirt.

“We are lucky to have such a strong partnership and there is more planned for next year. It’s something to be really proud of and it’s exciting.

“The men’s side have led the way in England and in Europe so there is a lot to learn from them and I think the ethos they have, that they never give up is one we are absolutely bought into.

“When we played Quins earlier this year at home, we were three tries down with ten minutes to go - we came back and won it and I think some of that is down to the belief you have when you play for Saracens that you keep fighting.

“It’s not something that just happens naturally - you have to work incredibly hard to get to that place but there is just a vibe here that you work hard and you have a lot of belief and that filters through to us.”

Having been crowned English champions again this season, McKenna reflects on a superb final performance where they blew their rivals Harlequins away early in the game.

“We went into the game missing key players like Bryony Cleall, Marlie Packer and Vicky Fleetwood and I think to be honest we just felt we had everything to gain and nothing to lose. We threw a lot into it without the same weight of expectation and we just felt unbridled. It was probably the best we have played all season and it was just a superb way to win a final.”

McKenna also cites her maturity as a player as a factor in her own performances for England this year.

“I can just go out there and enjoy it now and what’s also important for me are the relationships I have with key players which are totally different from when I first started. I used to be the kind of player who called a move because I hadn't called it in a while, but now I have such a better understanding of the right thing to do, when and why. I work much better with Katy Mclean for example and I have a say in filtering in the tactics from further out and I really enjoy that.”

The battle with Waterman for the number 15 shirt also makes her appreciate the fact that she now has ownership of it.

“We’ve always had a very good friendship, despite me trying to chase her shirt for years. I used to get on the field with 10/15 mins to go and in my mind I’d want to try and be better than her so that would lead to some maverick and probably bad decision making and I was trying a bit too hard to chase it and force it. It didn't work. I think now, as a starter and someone who is more relaxed and me just being me, it means I am a better all round player for England.”

She is looking forward to a hectic summer with numerous camps and then games against USA, Canada, France and New Zealand in the Super Series.

“There are some big games within this competition and I think the question of the summer probably is who is the best time in the world currently. If you can come out on top there, you can have that for a few months anyway and it’s about finding out where you are at this stage of the World Cup cycle.”