Mexico have won the 2017 Women’s Rugby Americas North Sevens and with it a place at the 2017 Sevens World Cup in San Francisco after a wildly unpredictable weekend all came down to the final game. 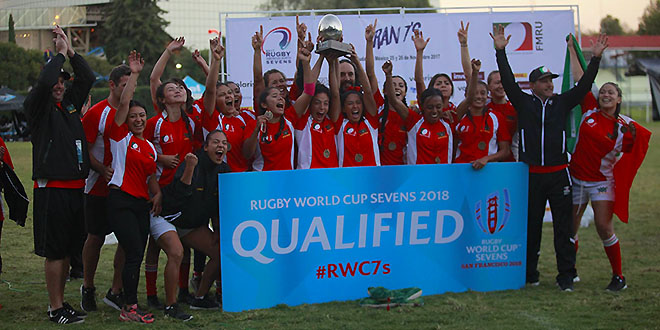 Mexico were always going to be among the favourites for his year’s RAN Championship, where they were up against Trinidad, Bermuda, Dominican Republic, French Guyana, Guyana, and Jamaica. Although they were hosts, being at home is not always an advantage in sevens.

The tournament also saw the debut of French Guiana – a team unique in international sevens in that, prior to this tournament, had not lost a game for over five years - since February 2012. That said, all their previous matches had been against other French Caribbean territories, so how good were they?

The answer seemed to be very good as they upset everyone’s calculations by winning their opening game – against Mexico – 26-14.

Technically part of France, French Guiana are not members of World Rugby so would present certain problems if they had won the event, but the chance of a shock debut win in this key tournament looked possible… until they lost their second game, to Trinidad, 24-14.

That win put Trinidad firmly in the driving seat at the end of Day One… but then at the start of the second day it was Trinidad’s time to suffer a surprise defeat as they went down 29-5 to Jamaica – who had lost twice on the opening day.

Tension was high as the next round of games saw Mexico beat Guyana by a single try, while Trinidad and French Guiana came through unscathed against the Dominican Republic and Bermuda.

At the start of the final round of games, French Guiana, Mexico and Trinidad all on four wins, with the latter two playing each other in the final game.

However, the pressure seemed to get to the French as they lost a game that might have won them the title 26-14 to a resurgent Jamaica– the Jamaicans going through day two unbeaten, and bitterly regretting their opening day loss to Guyana.

The tournament therefore came down to a straight winner-takes-all shootout between Mexico and Trinidad – and it was the Mexicans who won a tense game 5-0.

The home victory means that Mexico has qualified for the 2018 Rugby World Cup Sevens. This marks an historic first ever appearance at the event.

Coached by former Canada Sevens international Robin MacDowell, Mexico were the home side and called-upon vibrant support. The grounds at the Campo Marte were approaching capacity for the event.

In winning the competition Mexico have also earned the right to compete at the 2018 Hong Kong Sevens World series qualifier, as well as the 2018 Central American and Caribbean Sports Organization (CACSO) Games.