Easily one of the standout players of this year’s shortened women’s Six Nations, Ireland hooker Cliodhna Moloney is back in Galway hopeful Ireland can carry on with their momentum into the rest of 2020. 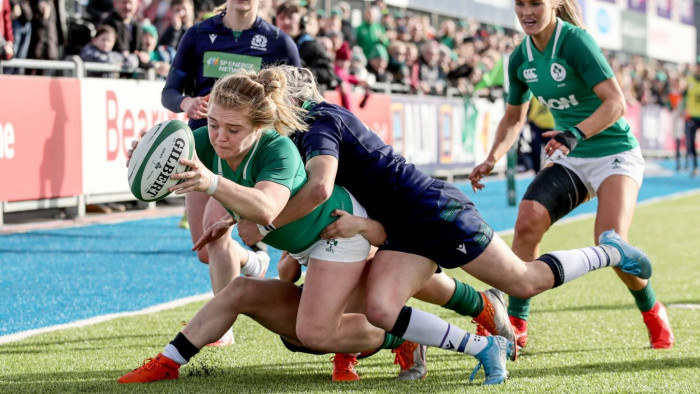 Returning after almost a season out with a shoulder injury, Moloney’s form for Ireland was outstanding this year, with her rampaging runs, hard-hitting defence and a couple of brilliant scoring finishes marking her out as one of the leading players in the tournament.

The Wasps player believes the time out has made her stronger mentally and physically.

“You have to be very patient with a shoulder injury. I’d always been sort of an angry player but it wasn’t always controlled. I don’t always get it right now, but I had been reckless at times before and so when I came back I think I was in much more control of that.

“Shoulder injuries force you to come back a bit slower anyway and I don’t think I am really back at the right level yet but I am getting there. My throwing is still a bit off where it was. I am working on that all the time.”

Forseeing what was on the horizon, Moloney flew back to Ireland from London just before the lockdown and is spending her time on her parents farm in Galway.

She’s grateful of the space and of the efforts the coaching teams at Wasps and Ireland are making with their players.

“I am glad to be here. There’s loads of room to train and have space whereas I live in an apartment in London with no garden.

“We can only move within 2km of where we live here, but there is a GAA field open nearby so I am able to use that for training and I can use the fields here beside my the house,  though it’s a bit bumpy!

“The strength and conditioning coaches we have at Wasps and Ireland have been brilliant in giving us programmes and work to do.”

Moloney uses Zoom to dial into sessions with her teammates, and there’s fun too with a pub quiz organised by the Wasps coaches and a TikTok dance party at the end of one tough session last week.

She can see the upside in the time out the game has now.

“It’s an opportunity to train differently, to focus on functional movements more and that can’t be a bad thing. Every rugby player wants to play games obviously, but I think it will allow people to come back to the game stronger and fitter.”

Moloney missed Ireland’s annus horribilis in 2019, when the team managed just one win in the Six Nations.  The entire season was a difficult one from the sidelines she says.

“The injury came at a time when there was a lot going on with Ireland." she says.

"None of us were really happy with how we were performing and there was a huge hunger to improve. Then I got injured and I just had to deal with that and not be able to do anything about Ireland.

“I had only been in London a few months and had only manged to play a couple of games for Wasps, so I went back to Ireland to have the surgery and came straight back. I continued to train and managed to get back for the last league game. I just had to toughen up to be honest. I think I came back much stronger defensively than I had been and more willing to try things in attack.”

“It was hard to watch Ireland struggle with results on the field. I wasn’t playing but I was living with Clare Molloy in London and I could see how hard it was for the players.”

This year has been a much stronger one for Ireland who were building real momentum in the tournament with wins over Wales and Scotland and a decent defensive performance against England.

Moloney says there are a couple of key factors which have improved things significantly.

“We have a new defence coach in Kieran Hallett and I think our defence has massively gone up a level this year so that has been a big step in the right direction.

“We were disappointed not to get to play France because I think we had learned a lot from the England game and were ready to put that into practice but definitely we defended so much better this year.

“The other thing for me is that I think the game knowledge also moved on for a lot of the newer players this year. The quality of those players too coming through made a huge difference.

“Players like Dorothy Wall, Judy Bobbett, Enya Breen, Beibheann Parsons – they are fantastic and they’re coming into the test game now with a lot of good experience behind them.

“When I came into the team in 2015 I was very new to the game and didn’t have a lot of experience. We’re seeing players come in now who have been playing longer and are talented athletes – there is huge value in that.  That extra year of development has been huge for players like that.”

Moloney is one of the many Irish players who originally played Gaelic Football, the Irish sport which has a huge following and player base among girls and women. Though lots of players have made the crossover, Moloney says competition from Aussie Rules who can pay GAA players and offer a entirely new lifestyle means some highly talented footballers who might have considered the switch to rugby at the highest level now have a viable alternative.

“I know lots of the girls who have gone down to Australia to play would make fantastic rugby players so there is a loss there in terms of potential talent transfer to rugby.

“We also need as a national team to provide the moments of inspiration that get young girls thinking they want to play rugby in what’s a competitive marketplace for sport.”

Moloney knows the power of this concept more than most having been inspired to take rugby much more seriously after watching Ireland’s shock win over New Zealand in 2014.

“I was over in New York for the summer playing Gaelic Football and I watched that game in my apartment. It was brilliant and I had been playing rugby at home with Railway but not that seriously yet.

"That game made a huge difference to me – it was the catalyst to me coming back and working much harder to improve my game and eventually get into the Irish team.  The profile of games like that and World Cups is so important. We know how important it is that we qualify whenever the schedule gets to it later this year.”

Having started her club career with Dublin club Railway, Moloney is enjoying playing in London, where she plans to stay for the forseeable future, and is honest in her appraisal of the differences in the domestic game in Ireland and England.

“There are two aspects to it. One is the competitiveness of the games. Most games in England are very competitive – and that will probably be even more so once the league changes around again next year.

“The other aspect is around training. We have far more contact here with each other and with coaches. That could obviously happen in Ireland.

“There is an idea that if you are playing over here, you’re getting paid so it’s not comparable to Ireland, but that’s not the case. I often feel guilty that those of us playing here might be giving off a misconcetion about that.

“I work part time – I made that choice and am very lucky I can do that and train and afford to live in London. I know not everyone can do that, but I am not getting paid to be here to play rugby. I would love for that to be the case for players some day but it's not the reality at the moment.

“For Ireland to get to the levels of contact we can do here, there needs to be investment in coaching so that time and attention can go up but it’s not near that yet."

For Ireland's club game to move forward it will need players of Moloney's calibre returning to the fold at some stage.

For now the Irish league's loss is Wasps gain but her country will need her more than ever later this year as the aim to book their place in New Zealand next year.