Moyse back in Canada squad 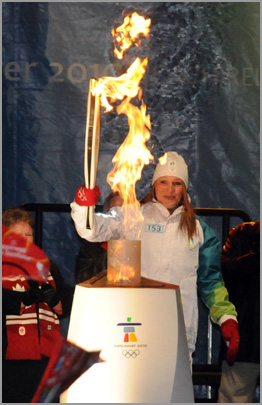 Heather Moyse (pictured) will be part of Canada's ten day training camp in April just two months after winning a gold medal in bobsled at the Winter Olympics in Vancouver.

Moyse, who was the top try scorer at the 2006 Women's Rugby World Cup is back in the mix as the Canada women's rugby squad assemble for an intense camp in Alberta from April 8-18.

The camp was organised at short notice after Canada's tour to New Zealand was cancelled just months out from the 2010 World Cup. Canadas UK-based players, squad captain Leslie Cripps and Sarah Ulmer, will also fly in for the domestic camp.

Instead of missing a chance to train together, 30 members of the squad will work together and head coach Johnathan Long says the time together will be invaluable.

We are able to have more time to ensure our preparation is right, even with no real game preparation taking place. The logistics of this country make every opportunity for us to have everyone at a camp important. Now we can analyze performance at each training session and work on key areas identified during our last 3 tours. Everything is building towards the world cup and you only have to watch the women's 6 nations to see that the 2 teams in our group, Scotland and France, are both preparing well.

Part of Longs coaching philosophy involves focusing on one key word per event, and with this camp the squad a chance to look in the mirror, the word of the week will be honesty.

The plan of the camp is to focus on solidifying factors like making our opportunities count, and bending but not breaking in defense. Conditioning is also a major element for us to see how we are progressing. I am using the word 'honesty' as a key word for everyone, including the staff; we have to get things to a level where we have confidence in our plans.

Teams competing in the 2010 World Cup do not have to submit their roster to the IRB until a month before the competition,so places are still up for grabs in the Canaduan squad who have 20 days in all to prove their worth 10 days at the April camp and 10 more days at a Can-Am competition in June.

Long explains a bit of his staffs thinking when it comes to selection.

We are taking 30 players to the camp but this is by no means the final opportunity. We must have the best 26 players going to the World Cup and although being at the camp is a large advantage, its what you do on the field in terms of performance that will ensure your seat on the plane to England.

Canada's prepartions were also boosted recently by the fundraising of large sums of money to go towards the squads finances which were in dire straits.

I would like to say a big thank you publicly to the Rugby Canada board for the kind personal donations to the program, and secondly the provinces for their continuing support. The financial relief for the players is a huge burden of their hands and I am very grateful for that.

Meanwhile tickets for the Women's Rugby World Cup are now on sale. See here for more.